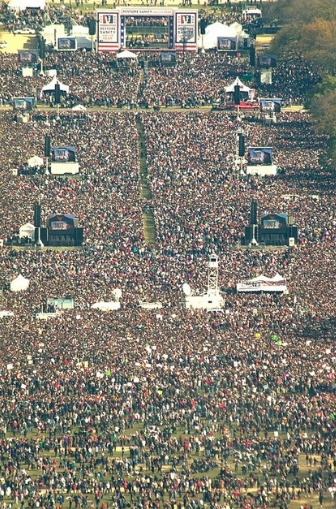 The Rally to Restore Sanity is over.  I had wanted to attend but could not on such short notice.  I was worried that not many people would be able to attend and Glenn Beck - or conservatives in general - would use the poor turnout as a reason to push their agenda even harder, but it appears I did not need to worry - the Rally to Restore Sanity beat out Glenn Beck's rally with a turn out more then two times the size!


The Rally to Restore Sanity has come to a close, and crowd estimates are beginning to trickle in. It is clear that a huge number of people attended the event (see photos from the rally here), but the calculations vary among sources.

According to CBS News, 215,000 people showed up for the rally on Saturday. By comparison, CBS estimated that 87,000 -- just 40% of the Sanity Rally estimation -- attended Glenn Beck's "Restoring Honor" rally in August.

Canada's CTV, meanwhile, wrote that 250,000 people were estimated to have partaken in the Rally to Restore Sanity.

I find this amazing, considering Beck promoted his rally for months.  I also find the comparisons between the two rallies because of the feud between Glenn Beck and John Stewart.  Also, think of it this way - the right-wing felt the media underestimated Beck's rally, so they gave estimates upwards to one million, so just imagine what that would mean for Stewart and Colbert's rally!

Here is an interesting observation - Andrew Breitbart's Big Government was void of any post regarding the Rally to Restore Sanity and Glenn Beck's The Blaze had a short review of the rally, insisting most of the rally were young pot-smoking white kids who didn't know why they were there.  Basically, conservative media tried to underplay Stewart's more successful rally - some commenters scoffed at the idea that Yesterday's rally had atleast 150,000 people and claimed Beck's August rally had four times that amount.

Basically, the right-wing will do everything to discredit this rally and try to push their false numbers to make it appear as if they are the majority when they are not...
Posted by Kevin at 1:50 AM