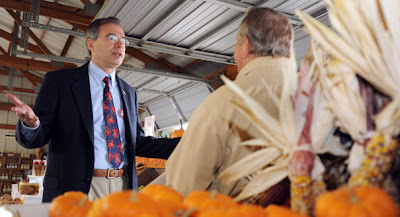 I as reading an article about incoming GOP Representative Andy Harris, who campaigned against "Obamacare," who was now bothered that since he was elected his government-provided health care hasn't kicked in yet.  Glenn Thrush wrote the following for Politico:

“He stood up and asked the two ladies who were answering questions why it had to take so long, what he would do without 28 days of health care,” said a congressional staffer who saw the exchange. The benefits session, held behind closed doors, drew about 250 freshman members, staffers and family members to the Capitol Visitors Center auditorium late Monday morning,”.

“Harris then asked if he could purchase insurance from the government to cover the gap,” added the aide, who was struck by the similarity to Harris’s request and the public option he denounced as a gateway to socialized medicine.

Harris, a Maryland state senator who works at Johns Hopkins in Baltimore and several hospitals on the Eastern Shore, also told the audience, “This is the only employer I’ve ever worked for where you don’t get coverage the first day you are employed,” his spokeswoman Anna Nix told POLITICO.

Under COBRA law, Harris can pay a premium to extend his current health insurance an additional month.

While everyone is reporting on the hypocrisy of wanting government health care while attacking it on the campaign trail, I saw something more interesting - his comment stating that the government is the only employer he had been hired by where he didn't get coverage on the first day of employment.  I find that interesting because most employers don't offer insurance on the first day - many require employees to work a certain amount of days or hours before they are eligible, and in plenty of companies, only full-time employees are eligible.

Does Andy Harris believe that if you have a job you have insurance?

No wonder why he opposed health care reform!

I had an insurance problem like Harris' a couple years back - I was laid off from by my employer, Albertsons LLC, and denied a severance plan because of a clerical error.  I lost health coverage (which I was only eligible for because I spent a certain amount of time with the company) and I also could not afford COBRA - the severance plan was supposed to pay for the over $700 a month cost, but since I was unemployed, I had no way to pay for such a thing.  I tried to rectify the situation with the company but Albertsons refused to disclose any documentation supporting their claims and denied any wrongdoing, insisting their clerical error was fact.  Eventually I got hired by another company, and had to wait months to get coverage for my family again.