I read a recent Big Peace article by John J. Xenakis and thought some of the comments left by Xenakis' supporters were quite offensive and I thought I would share a couple before they hopefully get deleted: 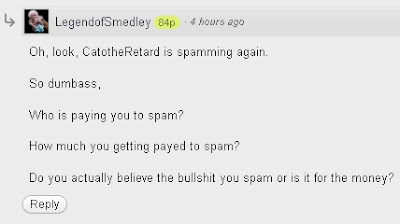 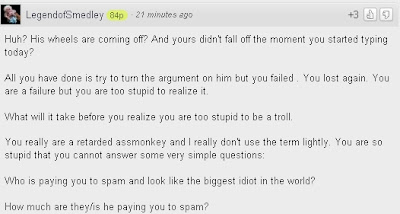 What were they in response to?  Comments like this:

While I don't agree with CatoTheWiser's approach, I understand the point he was making - the Biggers were not as open-minded and decided to go for the attack.  There were some interesting comments made in support of Israel, but for the most part they were drowned out by the loud-mouth commenters like LegendofSmedley, who preferred to resort to insults then actual facts.

CatoTheWiser made some very excellent points, and I would have liked to hear a reasonable response, but the Big websites are hardly the forum...

Update - It appears Big Peace believed some censorship was in order - the comment I posted above by CatoTheWiser was deleted, as well as many of CatoTheWiser's other non-offensive comments - eight in total.

The LegendofSmedley's comments I had reported had also disappeared so that with Cato's negative IntenseDebate score and frequently deleted comments, it would appear that Cato was the belligerent party.  Big Peace censors seemed to miss one exchange though: