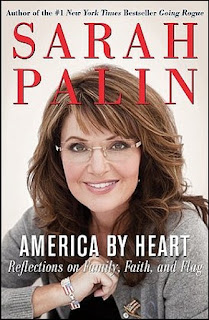 After reading some excerpts of Sarah Palin's newest book, "America By Heart," I found a couple more things that I thought were worth mentioning.

On spirituality, Palin wrote the following:


Most of those who write for the mainstream media and teach at universities and law schools don't share the religious faith of their fellow Americans. They seem to regard people who believe in God and regularly attend their church or synagogue as alien beings, people who are "largely poor, uneducated and easy to command," as the Washington Post once famously put it."

In the above passage, Palin is claiming that liberals don't have the same religious convictions as conservatives.  She doesn't explicitly say "liberal" or "conservative," but considering her criticisms in the past of there being a liberal bias in America's media and schools, then it is pretty safe to see just what Palin is implying.  Palin is guilty of what she accuses those liberals of doing.  In her last sentence, she claims those on the left accuse those on the right of being easily manipulated because they have religion, but she seems to be attacking liberals for being manipulated for lacking religion.

On movies, she criticized movies like American Beauty for glorifying drugs and apathy while praising movies like Juno.


A European movie might have had Juno get her abortion in the opening scene and then spend the next hour and fifteen minutes smoking cigarettes and pondering the meaning of life. It would have been depressing and boring. Not here. Americans want to be entertained, but we also want to see people do the right thing, even when it's hard and there is no prospect of being rewarded. Hooray for some in Hollywood for occasionally letting us see that.

It sounds as if Palin is basing her opinions off of the typical stereotype of French cinema, and having seen many French movies, I can say that Palin is wrong.  I also thought Palin's cheering of Juno was interesting - do you suppose Palin knew the movie's author, Diablo Cody, was a stripper who enjoyed stripping?  Maybe Palin should read Cody's other works like her Pussy Ranch blog or her memoir, Candy Girl: A Year in the Life of an Unlikely Stripper.  (Check out Palingates for a great post regarding Palin's criticism of Hollywood)


Had I listened to those who suggested it would be political suicide to hand the Governor's reigns over to my lieutenant governor entering my lame duck last year in office -- a choice I made so that I could fight for Alaska, and America, more effectively in a different venue -- then my state would have suffered from the obstruction and paralysis of my office by the politically motivated attacks that began the day I was announced as the Republican vice-presidential candidate in 2008.

Had I listened to the politicos (even some within my own political action committee) and shied away from endorsing candidates I knew were best for America -- people such as Susana Martinez, Nikki Haley, Doug Hoffman, Joe Miller and Karen Handel -- I wouldn't have been using my position in the best interests of the country I love.

Again, Palin is doing what she criticized others of doing.

"There is a narcissism in our leaders in Washington today," Palin wrote earlier in her book.  "There's a quasi-religious feeling to the message coming from them. They are trying to convince us that not only are they our saviors, but that we are our saviors... as candidate Obama proclaimed on Super Tuesday 2008, 'We are the ones we've been waiting for, we are the change that we seek.'"

She criticized Barack Obama for a "quasi-religious" message trying to convince America that he is our savior and knew what America needed, but in her own book she writes that she knew what was best for America, and need I point out that of the five candidates that Palin knew were best for America, three of them lost in the general election.  Hoffman not only lost once, but thrice - he lost last year and again in this years primary and general election.  It appears a majority of Americans did not agree with Palin's picks, but Palin doesn't care because she knows whats best...

And don't forget Palin's attack on NASA while forgetting her personal hero, Ronald Reagan, did the same exact things.

What is interesting is that these excerpts are only a small portion of Palin's book yet they represent some pretty big hypocrisies...
Posted by Kevin at 9:12 AM