Glenn Beck was onto something the other day when he claimed grocery prices were going to skyrocket, but I think he was off by an aisle or two.  After reading about the impending doom of the food commodities market, I got out of my computer chair and drove to the nearest grocery store where I walked the aisles for hours studying the prices and products until something clicked in the canned fruit and juice aisle - Muslims were poised to overtake the White House and institute Shariah law, and they begun to do so in America's grocery stores. 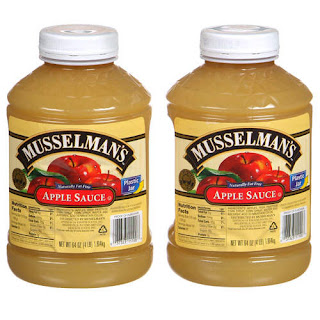 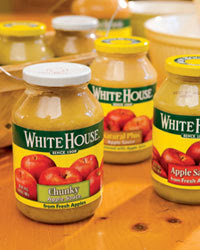 Most people can't, but utilizing my Jim Hoft and Frank Gaffney secret decoder ring, I was able to decipher the cryptic Islamic messages.

"Musselman" is an archaic English word for "Muslim" and "White House" is, well, the White House.

Considering the products are practically identical - saucy bits of apple - it is like saying Muslim's White House...

And why apple sauce?

Because of Johnny Appleseed, of course!  He was an American folk hero who introduced apple trees across America to large parts of the Midwest.  This appears to be the strategy of modern day Musselmans - just look at the prevalence of Islam in Dearborn, Michigan and Frankford, Texas...

With every purchase of these products, American dollars are flowing overseas to fund terrorism... maybe...

Did Michelle Obama convert to her husband's religion?  You be the judge...

Disclaimer: This article is a joke intended to illustrate the ridiculousness of actual right-wing conspiracy theories.
Posted by Kevin at 3:49 PM