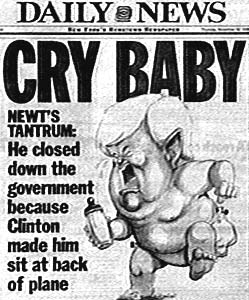 Big Government posted an "Open Thread" article on their website Sunday regarding government shutdown and their support of a repeat.


Today, in 1995, the Federal Government began a partial shutdown of non-essential services. While most of the American public barely noticed this, the GOP, unfortunately, quickly blinked. Hopefully, we won’t make the same mistake again.

I thought this brief post was interesting.  Big Government's editorial board believes the government shutdown was a good thing.  I thought it would be good to take a look at some of the results of the shutdown, as detailed by the Congressional Research Service.
So let's see - the shutdown stopped aid to veterans, cut assistance for basic needs for Native Americans, and caused millions in losses to American industries.

Last shutdown was caused because Newt Gingrich got upset because he had to sit at the back of Air Force One with Bob Dole.  Tom DeLay writes in his book No Retreat, No Surrender:


"He told a room full of reporters that he forced the shutdown because Clinton had rudely made him and Bob Dole sit at the back of Air Force One... Newt had been careless to say such a thing, and now the whole moral tone of the shutdown had been lost. What had been a noble battle for fiscal sanity began to look like the tirade of a spoiled child. The revolution, I can tell you, was never the same."

Now look at this new batch of Republicans coming in who want to shut down the government because they believe Obama wants them to "go to the back of the bus."

See the similarities?
Posted by Kevin at 1:22 PM