If you are one of the many people who download media from the internet illegally, you may have been met with this image: 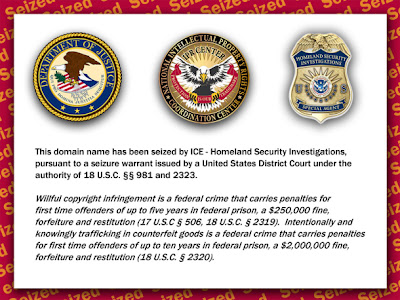 The message is pretty self-explanatory - these websites were actively participating in the theft of intellectual property and were shut down by the government, much like a Somali pirate ship operating off the coast of Africa steeling oil tankers and being confronted by the American navy.

Torrent sites that link to illegal copies of music and movie files and sites that sell counterfeit goods were seized this week by the Immigration and Customs Enforcement division of the Department of Homeland Security. Visitors to such sites as Torrent-finder.com, 2009jerseys.com, and Dvdcollects.com found that their usual sites had been replaced by a message that said, "This domain name has been seized by ICE--Homeland Security Investigations, pursuant to a seizure warrant issued by a United States District Court."

"My domain has been seized without any previous complaint or notice from any court!" the owner of Torrent-Finder told TorrentFreak, which listed more than 70 domains that were apparently part of the massive seizure.

DHS representatives did not immediately respond to a request for comment.

The seizures came after a Senate committee unanimously approved a controversial proposal earlier this month that would allow the government to pull the plug on Web sites accused of aiding piracy. The Combating Online Infringement and Counterfeits Act (COICA) allows a Web site's domain to be seized if it "has no demonstrable, commercially significant purpose or use other than" offering or providing access to unauthorized copies of copyrighted works.

Not everybody agrees with the government's decision right-wing website Big Government sides with the pirates - sort of.

Mike Flynn wrote an article for Big Government admitting that he knows nothing about the websites in question (a bit reminiscent of Obama's "acted stupidly" comment?), but he has no problem defending their illegal activities because they are not deadly terrorists (more on that in a bit).


Okay, so each of the domains seized is probably breaking the law. Knowingly violating someone’s copyright is rightfully against the law. I don’t know anything about these sites, but, for now, I’ll assume they were selling knock-off goods as the real thing and not as some kind of faux Louis Vuitton. Still, this part of the article bothers me:


The owner of an affected site told TorrentFreak that his domain was taken over without any prior complaints or notification from the court.

So, the sites were seized before the site’s owner heard any charges or had the chance to submit any counter evidence in court. The owners of the sites had their property seized without being allowed to defend themselves. I successfully avoided law school, so I don’t know the exact legal term, but this strikes me as an overstep in their enforcement authority.

But, the article begs an even bigger question: What the hell do fake Guccis have to do with homeland security?

I can appreciate that trafficking in fake goods and music piracy inflict substantial economic harm on the branded companies and labels. But, I do appreciate also that this has nothing to do with protecting the country from foreign or domestic terrorists. We still have a Justice Department, right?

Mike Flynn believes that fake purses are a matter to scoff at and believes the government has overreached its authority, but I would like to reference an article from The Sunday Times from 2005 that may connect the dots for Flynn, who would most likely prefer to live in his bubble of ignorance.


TOP designers, including Burberry and Louis Vuitton, are warning that profits from cheap fakes sold on the high street and the internet may be used to fund Al-Qaeda and other terrorist organisations.

The warning — backed by Interpol — comes amid rising concern about the number of counterfeit items imported into Britain. Seizures of fashion copies have more than tripled since 2001.

The designers are urging customers to think about who profits from the sale of fake goods. Intelligence experts believe that terrorists and organised crime syndicates are increasingly using counterfeit goods to raise money.

Stuart Lockyear, director of intellectual property at Burberry, said: “The links of counterfeiting with terrorist organisations, including Al-Qaeda, are becoming much clearer...

Customers who snap up cheap replicas of luxury brands may be sceptical of the motives for such a warning. Interpol has confirmed, however, that the counterfeiting trade has been exploited by Al-Qaeda and other terrorist groups.

John Newton, an Interpol officer who specialises in intellectual property crime, said: “North African radical fundamentalist groups in Europe, Al-Qaeda and Hezbollah all derive income from counterfeiting. This crime has the potential to become the preferred source of funding for terrorists.”

Earlier this year police raided two factories in Faisalabad and Gujranwala, Pakistan’s two leading industrial cities, and arrested the owners who were producing replicas of Boss and Lacoste clothes. The fake products were due to be shipped to London.

In addition to the donations to mosques, Interpol says there is direct evidence of Al-Qaeda’s link with the counterfeit trade. In 2002 customs officers intercepted fake perfumes and other counterfeit goods en route from Dubai to Britain and later established it had been sent by an alleged member of Al-Qaeda.

In the same year in France, three suspected members of the Salafist Group for Preaching and Combat, which has links to Al-Qaeda, were arrested for involvement in counterfeiting. Seventy boxes of fake clothes were seized.

What was the name of the terrorist organization that was behind the September 11th attacks?

Of course, the whole purpose of Flynn's ignorant ramble is to prove the Obama administration is transforming the government into a police state, abusing the Department of Homeland Security along the way.  Flynn also believes crimes other then those linked to terrorism should be overlooked by the Justice Department.

"In the aftermath of 9-11, when the creation of DHS was being debated, would your opinion have been swayed if you knew that, within just a few years, the proposed agency would be seizing websites peddling fake purses?" asked Flynn in his post.  Flynn seems to not only suffer from ignorance, but also amnesia - those were the exact concerns American's had when the DHS (and Patriot Act) was created.

I am not defending Flynn's criticisms of the DHS's actions to prohibit piracy, but I just want to point out that people like Flynn like to play naive when it comes to homeland security and then write as if they invented these concerns against the department when obviously these opinions have existed for a long time.  Flynn claims to be a policy expert in his bio, but why would he ignore the fact that counterfitting and piracy have been linked to terrorism?

Could it be Flynn is trying to promote his agenda and is willing to leave out some facts to scare people into agreeing with him?
Posted by Kevin at 10:34 AM