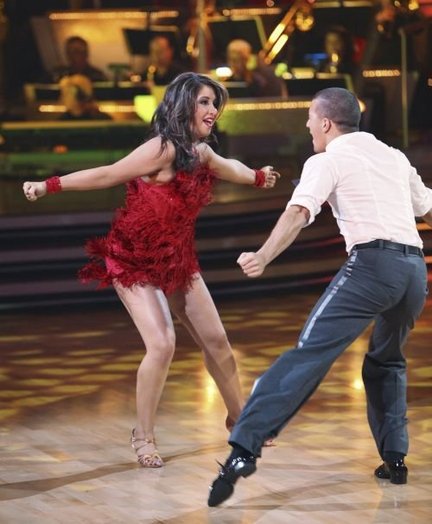 TMZ's Harvey Levin dove into conspiracy theory territory when he recently discussed his thoughts as to why Bristol Palin is still on ABC's "Dancing With The Stars."  Levin seems to believe Bristol's mother is playing into the reason why she hasn't been booted yet considering her dancing isn't all that great.  While TMZ poked fun at their fearless leader, I have to agree with Harvey to a certain degree, but I thought there was something else interesting - a commenter on TMZ made an excellent point stating that Sarah Palin fans have most likely been inflating Bristol's numbers to keep her on the show, and considering the fanaticism that surrounds the cult of Palin, I wouldn't be surprised if these mindless drones are just phoning in their vote for Bristol solely because they love her lying mama.

Why exactly am I wasting my time discussing the Alaskan Claptrap and her daughter's appearance on some television dance-off?

I find the lengths to which her fan base would go to appalling - they can't be objective and seek to taint everything they touch because they have to have it their way...

Can't wait until 2012 when the Palin sheep try double-stuffing the ballots with her name on them, and should she lose, I can half-expect Palin to take her turn at being a write-in candidate...

Update -I had just found this article at a Firedoglake weblog called La Figa that discusses the potential ballot stuffing that may be keeping Bristol on the show, as well as detailing just how someone can manipulate the voting on DWTS.


1. You can vote multiple accounts on multiple browsers. So if you have 10 accounts you can vote them on IE, then switch to Mozilla, then to Google Chrome, and any number of browsers.

2. You can vote the same accounts on multiple computers. The system does not register that an account has already been voted.

3. You do not have to use a legit email to start an account. For example, I pick a local college. All of their emails end in nctc.edu, so I make up an user name and add that to the end in order to make up additional accounts.

5. Start voting as soon as the show starts-once its over phone lines are jammed and online voting slows down. I normally vote until around 11CST, get a few hours sleep and then hit it again. Overnight the online voting is much faster.

I decided to check out some popular Mama Palin fan sites to see if any of them worked hard to see the younger Palin keep on dancin' - Conservatives4Palin (C4P for short) didn't even hide their voter fraud efforts - they have articles devoted to cheating the other hardworking celebrities and dancers by giving the contact information and text-in codes for Bristol.

Here are a couple of the comments I found from Palin's September performance: