I thought this was too funny to pass up - Wayne Crews wrote the following words for Big Government:


On this Thanksgiving holiday, the economy itself might be thankful if Congress would take a machete to the regulations strangling business and job creation.

From transportation to trade, from communications to banking and from telecommunications to technology policy, policy makers of both parties have at times challenged the moral legitimacy  and economic rationality of federal regulatory intervention. For example Democrats helped spearhead transportation deregulation decades ago; both parties rolled back unfunded mandates in the 1990s.

Regulations are frequently anti-competitive and anti-consumer, annually costing consumers hundreds of billions of dollars. The Small Business Administration, in a study by Mark and Nicole Crain, peg today’s cost at $1.7 trillion. Policymakers still largely do not know the full benefits and costs of the regulatory enterprise. Meanwhile, regulatory agencies grow in power and budget; simply look at EPA carbon-dioxide regulation campaign, FCC’s net neutrality hunger, and the rules-to-come from the health care and financial reform bills.

Now read this excerpt from a Derek Thompson article for The Atlantic:


American companies just had their best quarter ever, raking in profits at an annual rate of $1.66 trillion, Catherine Rampell reports in the New York Times. Corporate profits have been on a roll for the last year, but the unemployment rate is frozen between 9 and 10 percent. What gives?

There are all sorts of credible explanations for why profits are recovering faster than jobs, including but not limited to: (1) Unemployment is a lagging indicator anyway, because companies don't hire in big batches until they have a dependable flow of income; (2) Executives have become more obsessed with earnings reports since their compensation became more tied to stock prices in the 1990s; and (3) Technology and globalization have nibbled away at middle-education, middle-pay positions.

If you read Crews' article, you get the impression that regulation is destroying business and job creation, but if that was the case, why have businesses had their best quarter ever? 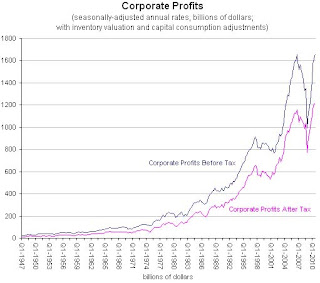 I also thought it was interesting that Crews stated that "policymakers still largely do not know the full benefits and costs of the regulatory enterprise," meaning he doesn't know anything good about regulation but he can surely theorize many bad things about them.  Policymakers may not know the full benefits of the "regulatory enterprise," but I think the quarterly profits of $1.66 trillion is a good start.

Thompson went on to write the following:

What kind of intelligent thing does Crews have to add?  Nothing.

Crews believes the fault lies solely on government regulation and that needs to be reformed, despite lacking any kind of facts to back up just why any regulation is bad .  He fails to look at any of the causes of slow job growth, like what Thompson quickly pointed out, and relies on anti-regulation rhetoric to carry his piece.  I suggest Crews go back and do some research if he wants any new converts...
Posted by Kevin at 9:43 AM