Sarah Palin Favorites Birther Tweet, Then Claims It Was By Accident...

Here is something interesting by CNN's Gabriella Schwarz, Peter Hamby and Steve Brusk:


Former Alaska Gov. Sarah Palin caused a bit of a stir Thursday when a tweet from conservative commentator Ann Coulter appeared on a list of her account’s favorite tweets.

The tweet showed a picture of a sign outside “The Blood of Jesus ATLAH World Missionary Church” in New York. The sign read: “The blood of Jesus against Obama history made 4 Nov 2008 a Taliban Muslim illegally elected president USA:Hussein.”

Coulter originally re-tweeted the item from the account of liberal commentator Marc Lamont Hill. The two often appear on television together.

After the Palin camp was reached for comment, it referred CNN to a statement given to ABC’s Jake Tapper.

“I've never purposefully ‘favorited’ any tweet. I had to go back to my BlackBerry to even see if such a function was possible. I was traveling to Alaska that day...it was an obvious accidental ‘favoriting,’ but no one can mistake that Ann Coulter was obviously being tongue in cheek with that tweet,” Palin said in the statement. “Shall I correct this with whichever wonderful media outlet ran with this (an obviously bored reporter...since there must be nothing going on in the world today, like, um, ramifications of a shake up of power in the U.S. House of Representatives?).”

Here is an image of the sign in question: 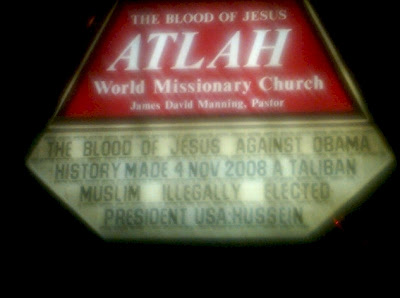 Palingates had detailed the incident, pointing out that Palin had since deleted her twitter favorites.  Patrick had written the following:


I know you are reading this. Let me explain: "'Favoriting' a tweet" is not function in the Blackberry, ok? It's a function in this little twitter thingy which you love to use every day to spread your wisdom.
You favorited not just one tweet, but six tweets in total, including a fundraising appeal to SarahPAC. To refresh your memory, these were your "favorited tweets" before you deleted all your favorites today.

Palin is just trying to do some damage control.  Just consider the message of the sign above and Palin's past comments about the president - last year, Sarah Palin had referenced the Obama birth certificate conspiracy by stating the electorate had a right to know.

"I think the public rightfully is still making it an issue," wrote Palin. "I don't have a problem with that. I don't know if I would have to bother to make it an issue, because I think that members of the electorate still want answers."

A day later, Palin came out with this backtrack (similar to her favorite tweet correction): ""Voters have every right to ask candidates for information if they so choose. I’ve pointed out that it was seemingly fair game during the 2008 election for many on the left to badger my doctor and lawyer for proof that Trig is in fact my child."

I would like to mention something Palin forgot - her medical records.  While every candidate released their medical records prior to the 2008 election, Sarah Palin promised the American electorate that she would too, but then balked, presenting a short letter from her doctor instead.

As for the Trig question, considering Palin's reluctance to supply any information, I think it is legitimate.  Obama had made available his birth certificate online, but that was still not enough proof for those who wanted to believe the president was born in Kenya - a belief that is completely ridiculous and should require no validation.

Robert Schlesinger wrote the following for US News last year detailing three things that were wrong with Palin's statements:


The key word there is "rightfully," which in this context means that it is right--as in correct or proper--to ask the question. She didn't say that the public has the right to ask, she said that it's right for the public to ask. That's an Alaska-sized difference.

Second, while there may be a clamor in the electorate over the birth certificate issue, it's only in that small part of the electorate that Palin pals around with: the wound up Republican base. So her assertion says more about the tea party echo chambers in which Palin is spending her time than it does about the issues voters are raising.

Third, there's her self-perceived magnanimity in the face of questions about whether her son is in fact her son. "Conspiracy-minded reporters and voters had a right to ask... which they have repeatedly," she said. But let's keep in mind that Palin is (rightfully) famous for the wounds she still bears over the questions conspiracy-minded reporters and voters asked. Rather than simply writing those questions off as the public exercising their right to ask, she (rightfully) reacted to them with anger and indignation. Looking forward to her turn asking nutty questions--"Maybe we can reverse that," she told the talk show host--is hardly the best way to retain the moral high grounds regarding being the victim of, as she puts it, "the weird conspiracy theory freaky thing."

It seems like every time the Alaskan Claptrap makes a controversial statement, she finds it necessary to try to erase it from history and offer a new explanation of what she meant.  The fact of the matter is that Palin liked the sign's message - a past Vanity Fair article had a statement by SarahPAC staffer Rebecca Mansour stating that "anything that goes out under [Palin's] name is hers," unless of course it doesn't look good, in which Palin takes the political mantra of "Deny. Deny. Deny." to heart...
Posted by Kevin at 3:44 AM