With pages of Palin's new book leaked on the internet, first appearing on the Sarah Palin watchdog website Palingates, Palin's content has quickly come under the scrutiny of the world wide web, ranging from her attacks against the president and his wife to criticisms about American Idol and its contestants, but there was one attack that I found very interesting - Palin wrote on page 164 attacking the president for using NASA for diplomatic purposes with Muslim nations. 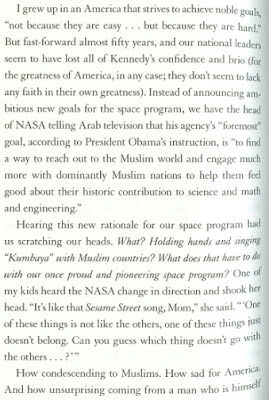 I thought this was interesting for one major reason - for all the time Sarah Palin spends praising Republican President Ronald Reagan, Palin seems to have forgotten her hero's own use of NASA for diplomatic outreach with the Middle East.  Check out this Jon Stewart clip from back in July, where he addresses this hypocrisy found deeply entrenched in the right-wing:


I also thought it would be interesting to cite Debbie Schlussel, who is known for her anti-Islamic writings - I had commented on her articles in the past, like her one claiming the president laundered money to Hamas or another attacking the Miss USA pageant for selecting an Arab-American (Schlussel claimed Rima Fakih was linked to terrorism because she shared a last name with some members of Hezbollah).

What did Schlussel have to say about NASA?

Back in July, Schlussel wrote the following:


I’m surprised everyone is shocked that Barack Obama’s NASA Chief, Charles S. Bolden, Jr., announced that one of his three primary missions at NASA is Muslim outreach.

In fact, the Obama administration is not the first to waste tax-funded NASA resources and space program on Muslims. Ronald Reagan and his VP, George H. W. Bush, were. But they just wouldn’t say so publicly. At least Obama’s people are finally open about this outrageous behavior that isn’t new to his administration. Sad, though, that it took Al Jazeera to get it out of them...

When I was an intern on Capitol Hill in the summer of 1985 and still in high school, Saudi Prince Sultan Bin Salman Bin Abdul Aziz Al-Saud held a giant party for all of the young interns on Capitol Hill. He and the Saudi Arabian Embassy rented out the Capitol Center and hosted free food, music, belly dancers, and other entertainment, trying to reach out to America’s future leaders and convince them of the modernity, hipness, and “appeal” of Saudi Arabia. The was the real purpose. But the ostensible purpose was to celebrate Prince Sultan’s trip into space, courtesy of NASA–Ronald Reagan’s NASA. While ultimately this was Reagan’s move, it was carefully orchestrated by then-Vice President George H.W. Bush, a close friend to the Saudi Royal family.

The reason why I point to Schlussel's comments is because she really hates Muslims - enough to point out that Reagan did the same thing Obama is doing.  "Conservatives" like Sarah Palin, Sean Hannity, or Glenn Beck, like to put blinders on and only interpret what they view as helping their agenda.  If the founding fathers say something they did not like, they simply forget about it and spend more time focusing on a quote that they can interpret in their favor.  The same goes for crap like what is found in Palin's book.
Posted by Kevin at 8:21 AM