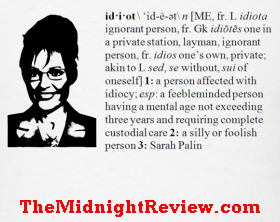 It seems that the Alaskan Claptrap, Sarah Palin, has decided to chime in on the newest release of classified documents by a Swedish-based website run by Australian Julian Assange - the website goes by the name "Wikileaks."

Using the worlds most sophisticated communication service, Twitter, Palin decided to send out the following message of disapproval to her fans: "Inexplicable: I recently won in court to stop my book 'America by Heart' from being leaked, but US Govt can't stop Wikileaks' treasonous act?"

In regards to Palin's leaked book, HarperCollins, the publisher of Sarah Palin's book "America By Heart: Reflections on Family, Faith, and Flag," had reportedly settled with Gawker.com - the website that leaked several pages of Palin's book. While the terms of the settlement have not been disclosed at this time, Gawker editor Remy Stern commented on the settlement stating the leak probably bolstered Palin's book sales.

"[It] generated a good deal of press for Ms. Palin's book in advance of its publication . . . Now that the book is out and destined to appear on the best-seller list, we're pleased that HarperCollins proposed settling this case as is, thus avoiding lengthy litigation for both sides," Stern noted.

So, given the fact that HarperCollins, not Palin, settled with Gawker.com, it would appear Palin's claim that she single-handedly stopped her book from reaching the internet seems to be false.

Now onto Palin's second claim that Wikileaks committed a "treasonous act" by releasing the numerous documents.

In case you missed the first paragraph of this article, let me reiterate an important fact - Wikileaks is not American. The website is hosted in Sweden and it is run by an Australian. Unless Sweden and Australia are one of the 57 states Palin thanked in her retaliation against her North Korean gaffe, then it looks like Palin followed up her last gaffe with yet another bigger gaffe.

In addition to her twitter comments, Palin also took to her other preferred method of communication - Facebook. Palin released yet another note blasting the administration for failing to act after the first Wikileaks release and urging the government to pursue Wikileaks founder as a terrorist - a position top Republicans wish to do. Palin claims Assange is an "anti-American operative with blood on his hands," but she, nor any other critic of Wikileaks, have been able to prove any recent event stemmed from the first leak of information.

While designating Wikileaks a terrorist organization is an interesting way to deal with the embarrassment of diplomatic cables being released to the public, it is a far more dangerous action, then say, anything Glenn Beck claimed "communist" Obama has done or plans to do. The GOP could potentially label any group they disagree with as a "terrorist organization" and act with virtual immunity.

Palin pondered just what exactly America did to prevent these leaks from happening, raising a couple questions of her own.


What if any diplomatic pressure was brought to bear on NATO, EU, and other allies to disrupt Wikileaks’ technical infrastructure? Did we use all the cyber tools at our disposal to permanently dismantle Wikileaks? Were individuals working for Wikileaks on these document leaks investigated? Shouldn’t they at least have had their financial assets frozen just as we do to individuals who provide material support for terrorist organizations?

Does Palin even understand what she suggests?

NATO, or The North Atlantic Treaty Organization, is an intergovernmental military alliance (thank you Wikipedia) where member states agree to a mutual defense in respond to an attack from an outside party.  Did Wikileaks launch a military attack against America, and would Palin suggest NATO allies march troops into Sweden to take down Assange's servers?

Does Palin not realize that Sweden is militarily neutral?  Would she suggest action similar to that taken by Adolf Hitler during World War II?

Let's go back to Palin's "treasonous acts" comment for a second.

Wouldn't a person have to be a citizen of a nation first in order to commit a treasonous act against that nation, and if it was a treasonous act, then why would Palin want to involve foreign nations in the dealing of a domestic problem?  Why would NATO respond to an act of treason?  If that was the case, would Palin support foreign troops on American soil?

Palin also asks if individuals working for Wikileaks were investigated?  Investigated by who?  I think Sweden may be outside United States jurisdiction, or maybe Palin is trying to prolong the spirit of the Bush Doctrine - you know, that thing that was the subject of that "gotcha" question asked by Charlie Gibson, which involves such concepts as preventative war and the right for America to secure itself against countries that harbor or give aid to terrorist groups.  Being that Palin claims Julian Assange is an anti-American operative, would Palin argue America has the right to enter European countries that are complicit with Assange's actions, like say, hosting his websites or allowing Assange to take up residence?

Palin also wants the assets of anyone involved in this most recent leak frozen.  Being that she believes Assange committed a treasonous act, would she then afford these individuals the right to due process - the same due process the right wingers felt the federal government deprived computer pirates and counterfeiters of when they seized thousands of piracy websites?


Though it remains to be seen whether the government will pursue legal action against WikiLeaks, precedent indicates it's unlikely.

In September, the Congressional Research Service released a report concluding that, "leaks of classified information to the press have only rarely been punished as crimes, and we are aware of no case in which a publisher of information obtained through unauthorized disclosure by a government employee has been prosecuted for publishing it."

Maybe Palin's handlers should have spent a little more time teaching Palin some foreign policy because it appears she still doesn't have the capability of understand the intracacies of, well, anything...
Posted by Kevin at 5:21 PM