While conservatives may argue that the stimulus halted free market progress, one thing is for certain, job creation and the economy are getting back on track, and as Marc Ambinder of The Atlantic points out, using a simple graph to illustrate his point, if things continue to trend upwards, it will be pretty hard to make an argument against the Obama administration and the Democrats competency in regards to the economy. 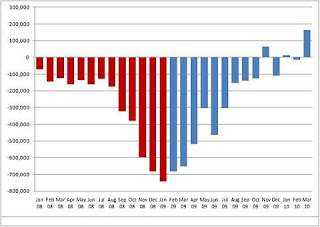 According to a CNN opinion poll, Democrats have lost their edge over Republicans regarding the economy. According to the poll, "48 percent of Americans say Republicans in Congress would do a better job dealing with the economy, compared to 45 percent for Democrats. That's a switch from last August, when Democrats held a 52 percent to 39 percent advantage on the economy." I think a contributing factor to this decrease could be the 24/7 coverage by conservative media outlets attacking health care reform, attacking it on all fronts, while focusing on the economic implications it may have for the future - Republicans knew the legislation would pass and were planning for their next narrative.

According to Midwest Voices' Yael T. Abouhalkah, "Republicans need the U.S. economy to stay in the dumps to increase their chances of ousting Democrats in Congress this fall. Fortunately for Americans, the economy is not cooperating with the GOP."

I am reminded of Rush Limbaugh's famous wish against the Obama administration:


So I’m thinking of replying to the guy, “Okay, I’ll send you a response, but I don’t need 400 words, I need four: I hope he fails.” (interruption) What are you laughing at? See, here’s the point. Everybody thinks it’s outrageous to say. Look, even my staff, “Oh, you can’t do that.” Why not? Why is it any different, what’s new, what is unfair about my saying I hope liberalism fails? Liberalism is our problem. Liberalism is what’s gotten us dangerously close to the precipice here. Why do I want more of it? I don’t care what the Drive-By story is. I would be honored if the Drive-By Media headlined me all day long: “Limbaugh: I Hope Obama Fails.” Somebody’s gotta say it.

What Limbaugh, as well as the rest of the conservative echo chamber seem to have forgotten, the Republican Revolution of 1994, when Republicans finally gained a majority in the House of Representatives after being a minority for 42 years, and with matching Republican majorities in the Senate to follow, Republicans solved zero problems. I have read so many blog posts and comments that claim the economic problems began during the Clinton administration's deregulation and that Democrats were to blame (using Clinton as a proxy because so many have pointed to the Bush administration's failures), which is funny, because deregulation is a Republican supported idea, and deregulation had continued on through the Bush administration, leading up to Limbaugh's proverbial "precipice."  For conservatives to hope Obama fails is to hope that the administration's policies, aimed at helping America, fail, and there is no way disassociating such a powerful criticism from the reality of the matter.  Obama is embodied in the ambitious legislation pursued by his administration.  Such legislation is designed to improve the conditions of America.  How would Limbaugh feel if commentators called for the Iraq war to fail?  While I am sure there have been a select few who have called for such a thing, I am certain conservatives would cry out that those people are wishing for American soldiers to die.

Lawrence M. Vance wrote for The Future for Freedom Foundation back in 2004 about what the Republican majority really meant.


The Republicans have now had total control — an absolute Republican majority — for more than a year. And what did they do during this time? The usual — nothing. No egregious legislation was repealed. The welfare state was not rolled back an inch. No federal programs or departments were eliminated. No budgets were cut. In fact, legislation got worse (the USA PATRIOT Act), the welfare state was strengthened (a new prescription drug plan), and a new federal department was created (Homeland Security). So now that the initial euphoria over an absolute Republican majority has subsided and the Republicans have been in charge for a year, the Republican record can be soberly addressed.

Vance's article hold true for today. While Republican's have no majority (they claim to represent the majority), they are reaching for any excuse to dismiss progress while ignoring their failed chances. In regards to recent job growth news, the Republicans dismiss any positive sign, with Michael Steele pointing fingers to a temporary boost from the U.S. Census.


"As Democrats grow Big Government, Americans grow weary of the strain on family budgets, job security and peace of mind. As America's employers announce the frightening and immediate impact of the Democrat government-run healthcare experiment on their balance sheets, American workers wonder why the only place exempt from increasingly painful belt-tightening seems to be Washington, D.C."

I look at this quote and I think of Vance's article. Steele claims Democrats are the ones growing "Big Government," yet it was Republicans that created a new federal department. Steele points to American weariness over "strained family budgets" and "job security" but it is the rising costs of health care and the economic implosion, spurred by Republican inaction and deregulation, that caused the strain in the first place. Steele claims that employers are "frightened" by "Democrat government-run healthcare," but again, it was Republican inaction that put an even greater burden on the individual while businesses remained unscathed, so I don't really see any harm in the Democrat experiment if it means a less stressful, more secure future. It is big business that appeared to be exempt from "painful belt-tightening," not Washington. While it is not fair to single out business, businesses expect to be treated with the same freedom's as American citizens, but throw a fit when they are targeted by legislation intended to benefit those who make up their organization. This would be like refusing an antibiotic (legislation) to weaken bacteria (business), even though it is for the greater good (America).

Republicans are unwilling to give credit when credit is due. Virginia Rep. Eric Cantor somewhat praised the growth, but added "(We) deserve far more than the up and down, roller coaster like unemployment reports of the past few months," and Georgia GOP Rep. Tom Price argued that the news was welcome, Americans have "yet to see the robust private sector job creation the Obama administration promised would come from its $862 billion failed stimulus." It seems their complaints are that growth is not as "robust" as they were promised, but again, Republicans seem inflicted with short term memory. From an article by Kimberly Amadeo from About.Com, "the main purpose of the economic stimulus package was to prevent the re-emergence of the panic that gripped investors in 2008."


The CBO projected these funds would increase GDP growth by 1.4% - 3.8% by the end of 2009. This does not mean GDP growth will be positive. The economy could remain in recession, defined as negative GDP growth. In fact, the CBO forecast the economy would be down 3% for 2009.

So, while Republicans cry about there still being unemployment, they fail to realize that the legislation was passed to restore confidence in the financial sector and to prevent increased job losses, and it appears that the legislation did just that, but it would appear that Republicans would only be satisfied should the number of jobs saved be at the upper end of the spectrum.

To point to another article by Kevin Drum from The Washington Monthly, studies show that Democratic administrations are better for the economy, and that during Democratic reign, every income class showed an increase in average pretax income, with the poorest doing the best, while Republican administrations exhibited the exact opposite, with the very rich receiving the biggest boosts. To me, it seems like a win-win situation, but to Republicans, it is the redistribution of wealth.
Posted by Kevin at 12:32 PM