Look Around And See The Plentiful Native Americans!

I was on another site and noticed an argument between two commenters on a particular article. The argument had digressed into if or if not the constitution provides for the things such as the health care mandate or financial reform. The argument had continually circled around the preamble's definition of "provide" versus "promote," indicating that America was never intended to be a socialist or communist country, but that communes were not a bad thing when entered into voluntarily or out of necessity, and that communes require a capitalist society to exist, but then I noticed one particular comment, which stemmed from the assertion that the pilgrims first entered into collectives but that their experiment failed until they accepted free market principles. A response to that statement included somewhat of a joke, stating that "capitalism and genocide" go hand in hand, and it is the follow-up comment that leads me to this post.


Funny how we still have plenty of Native Americans still with us. If it was genocide not so much!

I thought this statement to be extremely ignorant.

It appears that according to the responder, an act of genocide will only be considered genocide once a significant portion of the population has been wiped out, such as the Jewish population targeted in Nazi occupied Poland. The responder apparently believes that Native Americans are still plentiful. Considering information obtained from the last census, Native Americans, who were once the dominant people of this continent, have been usurped by Americans, with Native Americans making up roughly 1% of the population of the United States. The land of those people had been taken by the government and is currently administered by the Bureau of Indian Affairs. Here is a map of the reservations, as well as some statistics: 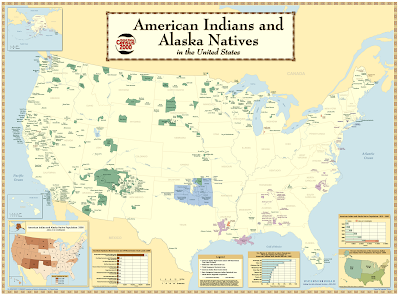 Here is an interesting website giving a time line surrounding events involving Native Americans.
Posted by Kevin at 6:32 AM