HOA Push Poll: "When Do You Want Us To Infringe On Your Property Rights?"

I woke up early today to head off to work when I found the following on my doorstep: 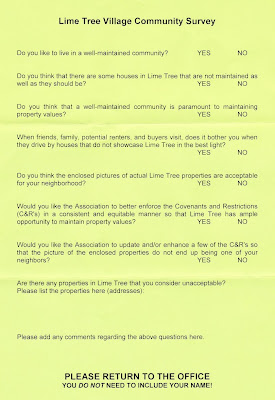 This document, disguised as a survey, is actually a push poll being conducted by the HOA to try and convince homeowners that they need more covenants and restrictions to govern their property.  They obviously don't understand what a survey is.

This poll had come complete with pictures of homes deemed "bad."  I apologize for the quality of the scan - the image is a from a color computer printout. 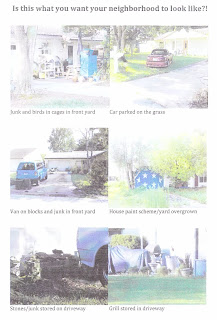 This push poll comes after the HOA's shame tactic of posting door hangers telling homeowners to put their trash cans behind the house:

Seriously?  I understand that the requirement to shield the public from viewing one's trash bins are in the covenants and restrictions, but some people just have too much time on their hands.  It's not a big deal. 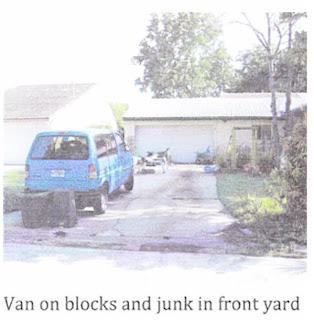 Back to the push poll, I thought their questions to be extremely weighted.  The only thing missing is asking whether or not homeowners would like to live next to a garbage dump.  As for the pictures, I thought that they were a bit misleading.  Take, for example, the "van on blocks" picture.  If you look closely, you would notice that the van has tires, not blocks.  Another example of the HOA misleading the homeowners is the adjacent photo displaying an overgrown yard.  Lime Tree pays for gardeners to mow, edge, and weed-whack every lawn on a weekly basis, so the only time a yard would be overgrown would be if the homeowner's membership was in arrears or if the home was in foreclosure.

There is also the matter of the upper right picture, depicting a home with "junk and birds in cages in front yard."  If you look at the picture, you can see that somebody had made a small patio.  The area is bricked in and surrounded by potted plants, with a picnic table, a couple shelves, and a bird cage.  Not everybody finds these arrangements appealing, but the same goes towards Stepford living - especially in a neighborhood with homes valued below $100,000.  Sure, at the height of the boom, some of the houses hit the mid $200,000s, but this neighborhood is far from being a neighborhood like Bay Hill, but obsessive compulsive control freaks who join the board of directors like to think that any change they make will make a difference.  Considering the HOA has been in existence and in the past year alone, some properties declined in almost $40k in property value, it would appear that the HOA really has no control over the greater forces of the marketplace, and for such inexpensive homes, adding increased liability to a property would do just the opposite - expanding covenants and restrictions would most likely reduce property values.

I suggest that the board of directors stop wasting their time looking into ways to take away people's property rights and spend more time looking into the process in which their previous lawyer, Larsen & Associates, converted the association into a mandatory one.  Currently, their methodology is being challenged in the courts involving the HOA of Sand Lake Hills.  The same methods used in that neighborhood were used a few years earlier in Lime Tree.  The HOA had become mandatory without approval of 100% of the neighborhood, and then after changing their covenants, they began to up their assessments, which is odd, because the surrounding villages of Williamsburg have been capable of keeping monthly maintenance assessments to the levels they were years ago.  Lime Tree's assessments have increase by 50% in the past few years.

So, over the past few years, property values have dropped and assessments have raised.  While there are numerous other contributing factors, I can definitely see a correlation...
Posted by Kevin at 9:17 PM