"When you question whether I love this country, you have crossed a line," he said. "If you are elected to office, you will not in the slightest be representing, nor even defending, the people of your state who did not vote for you. And that, perhaps, is the greatest crime against this country of which any politician can be guilty." 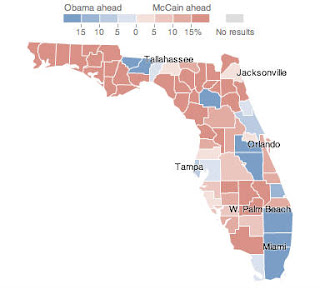 This is exactly the reason why I will not support Marco Rubio, or any other Tea Party candidate for that matter, and I was excited to hear it Olbermann say it out loud. It appears the governing style desired by the right is one that ignores minority rights, despite themselves being in the minority. The administration has governed with an inclusive style, appointing Republicans to prominent positions and trying to get their input on legislative efforts.

If Marco Rubio were to be elected governor, I have a feeling that he would ignore the liberals and moderates of the state, and govern strictly from the right, and in a state like Florida, you just can't do that!

Consider the close 2008 election between Barack Obama and John McCain. Obama won the popular vote with 50.91% to McCain's 48.10%.  While McCain won many counties, he couldn't pull the metropolitan areas, and it would be my fear that if Rubio was elected, these areas will most likely be ignored by the senator.  Crist had proven that he represents all of Florida, governing from the center.  Rubio's tough talk proves that he is in it to win it with only the support of the far right.
Posted by Kevin at 10:30 AM