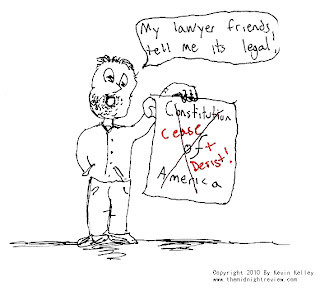 I thought this illustration was perfect in portraying the accusations by John Smithson of The Midknight Review against myself and this site.  Smithson had repeatedly attacked this site, making false accusations and outright bogus claims, and had recently stated that he was going to mail a "cease and desist" to me because my website's name is similar to his, sharing fourteen letters of the alphabet.

He also believes my articles are a riff on his own, which is completely outrageous, especially considering I had written an article about McCarthyism on April 14th and then coincidently after my post, five days later on April 19th, Smithson had a similar article, although he had taken it into a radically different direction, but you don't hear me crying plagarism.  I guess I should be flattered that Smithson uses this website as his muse.
Posted by Kevin at 6:53 PM