The Midknight Review: Round Two

After yesterday's warantless attack by John Smithson of similar sounding blog The Midknight Review, and my subsequent response, I figured Smithson would not show his face again, but instead, he resurfaced to offer a challenge, after more insults of course.

After seeing his initial comment that I had deleted, I had wrote a scathing article in retaliation.  Was my initial article too harsh?  I don't believe so.  Smithson had a preconceived notion that I was a Marxist obstructionist plagairizing the name of his website to advance some sort of subversive agenda.  He attacked my intelligence and made blatant lies and misrepresentations about myself and my blog, and so I felt I was justified in my response.  In addition to my article, I had also left the following mordant response on his article that he had written about me:

As I had written above, Smithson resurfaced and ponied up a few responses of his own on both my site and his. Here are the responses from his site (which is also directed towards my wife who had also posted on his site: 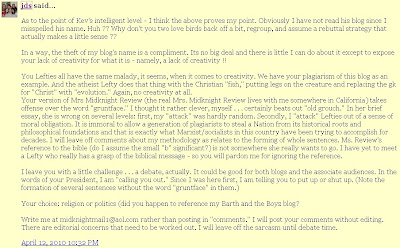 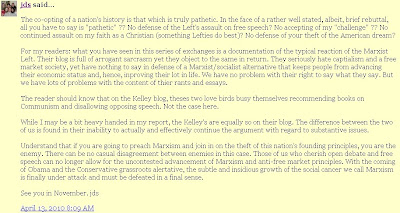 Here is the response left on my blog post yesterday: 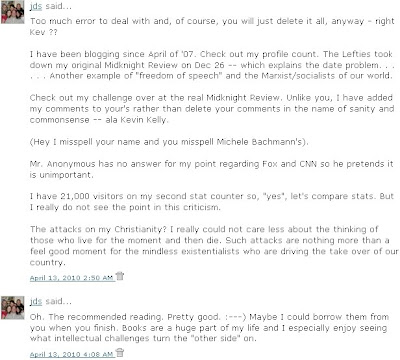 I had not deleted these comments because I felt I should respond, and no, I don't want to debate Smithson for a couple reasons, which I will address in a second.  I would also like to thank him for letting me know of the spelling error regarding Michele Bachmann's name.

Smithson's comments don't really seem any different from his first.  He still insists that I plagiarized my website's name, but adds to his insults by insisting that I am an immoral "atheist Lefty" aiming to "steal" America from the principles it was founded upon.  I also seem to be a "mindless existentialist" as well, which seems contradicting to the prior claim of my Marxist tendencies.  I also thought it was funny that he claims I recommend books on communism, as if I recommend books on communism, but in reality, he is referring to my sarcastic inclusion of some book links at the end of yesterday's post that I suggested he read - one being "The Complete Idiot's Guide To Communism," which was put up there to suggest that Smithson knows nothing about Marxism, socialism, or communism, and that he should read the book before making baseless accusations against others.  Obviously Smithson is and idiot, or else he would have realized such, and it is safe to say that anybody who takes Smithson's website as hard fact is also an idiot.

To analyze Smithson's comments, one would see that he does not care for honest debate.  He tries to provoke by insulting me and then when I don't, he addresses his audience to show that my inaction is proof of some leftist strategy.  He also indicates in the response left on his site that I am apparently "preaching Marxism," and therefore I am the "enemy," in which there can be "no casual disagreement between enemies," so what exactly would a debate entail?  Drew Westen had made the argument in his book "The Political Brain" that dispassionate debate alone would be futile when confronted with the passionate mind, because while one can offer hard facts, the opponent that allows emotion to take control will never hear the rational argument being made.  They will remain with their preconceived notions and allow only the information to support their opinions to enter.  Smithson has made it clear that emotion dictates his political beliefs.

Smithson has already proved to be absent of reason based on his numerous accusations against myself.  I am not a Marxist or socialist, atheist, or liberal.  I support a mixed economy, I'm a Catholic, and I am a moderate Republican, but Smithson looked at my blog and created a narrative for who I really was.  I suppose I was guilty for doing the same, but I sat through countless articles of The Midknight Review to try and prove myself wrong, but upon reading post after post, it became clear exactly who Smithson was.  His comments left on both my site and his further cemented my conclusion.  It is for this reason why I choose not to debate John Smithson.

I would also like to address Smithson's confrontations with the other commentors on this site, and in particular, fellow Midnight Reviewer, c.  C wrote the following:


Comments that add nothing to the discussion (specific to the post) or are pure inflammatory comments, commonly called "troll" comments, are usually deleted in most forums/discussions/blogs.

Your "deleted" comment is preserved in its entirety in this post. And from the looks of it had nothing to do with the article that you initially posted it on so was appropriately deleted there. 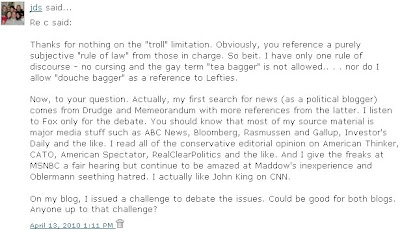 Smithson dismisses c's post and claims that the rules of posting are subjective and created by those in charge - in this instance, me, but here is how Wikipedia defines a "troll":


In Internet slang, a troll is someone who posts inflammatory, extraneous, or off-topic messages in an online community, such as an online discussion forum, chat room or blog, with the primary intent of provoking other users into an emotional response[1] or of otherwise disrupting normal on-topic discussion.

Smithson does not want to play by the rules.  He wants to yell his narrative as loud as he can and ignore any opposing view, and this is indicative of the Tea Party.  Watch any protest.  Watch any interview with Andrew Breitbart, or really, any program on Fox News.
Posted by Kevin at 6:51 PM