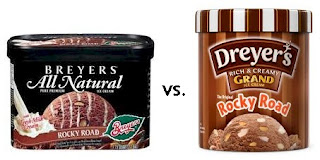 Considering the accusations of plagarism made by John Smithson of similar spelled website, The Midknight Review, I was reminded today of something surprisingly similar to Smithson's baseless claims while I was in the grocery store, and if you haven't already taken notice of the picture above, then I will now direct you to the picture above, which depicts a package of Breyers Rocky Road Ice Cream and Dreyer's Rocky Road Ice Cream...

While the graphic may be simple, it precisely illustrates the flaws in Smithson's arguments regarding this site.

Consider this Wikipedia entry regarding the confusion surrounding Breyers and Dreyer's:


Breyers is sometimes confused with Dreyer's, a Nestle brand. While William Breyer founded his ice cream on the east coast, another man, William Dreyer, founded an ice cream company on the west coast. As the two brands increased their reach across the country, a similarity of name issue was inevitable. In 1981, Dreyer’s made the decision not to sell Dreyer’s branded products in the east. In an agreement with Breyers, Dreyer's sought to market its product east of the Rocky Mountains under the "Edy's Grand" name.[1] However, Breyers made no similar reciprocal agreement, and by the mid-1980s began to distribute Breyers ice cream to states throughout the midwestern and western United States.[2] As a result, both Breyers and Dreyer's can be found on grocery shelves in western states.

Like William Breyer and William Dreyer, the The Midnight Review is based on the east coast, while The Midknight Review is on the west.  Both websites were developed independently by different people and both websites can be found together on the internet.

Maybe I should use the Breyers/Dreyer's defense in court should I ever get a "cease and desist," but I doubt that will ever come, because Smithson is just a bag of wind.  All he is good for is making ridiculous accusations and avoiding giving a true response to questions asked of him, but maybe he has realized that this site is not a plagiarized version of his after all, and has given up pushing the issue, considering his half-assed attempts at debate and his now less frequent visits to our blog posts to make such ridiculous accusations.
Posted by Kevin at 5:19 PM