Ryan Grim wrote the following for The Huffingtonpost today:


For the better part of a year, the GOP has blasted Democrats for legislating "behind closed doors" and making "secret deals." On Monday afternoon, the Senate will vote on a motion to proceed to debate Wall Street reform in public on the Senate floor.

Yet Republicans say their 41 members are united and will oppose the motion, in order to encourage Democrats to continue negotiating with them behind closed doors.

Condemning closed-door negotiations yet voting to prevent public debate is the height of hypocrisy, Sen. Jeff Merkley (D-Oregon) told HuffPost on Monday. "By voting against cloture, Republicans are voting to keep Wall Street negotiations behind closed doors, demanding changes to the bill without public scrutiny. Instead of closed-door deals, they should support open floor debate," said Merkley.

For over a year, conservatives have blasted Democrats and the Obama administration for not having open debate about health care reform, constantly playing Obama's campaign promise about televised debate on C-SPAN, but now, when it comes to financial reform, Republicans want to continue secret negotiations instead of bringing debate to the Senate floor. 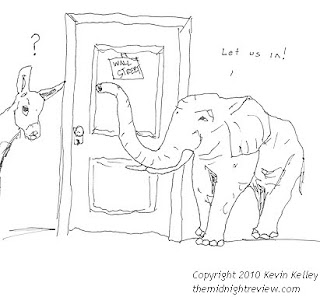 I am sure that if the bill is hammered out in private, Republicans can avoid a messy situation on the campaign trail this year when confronted with questions regarding financial reform, and I am sure some Republicans will even point the fingers at Democrats for unpopular measures in the bill, much like the critics of the stimulus packages who had gone back to their home districts touting the benefits of the bill.  If debate is brought to the Senate floor, Republicans just might have to take a greater stance against Wall Street to maintain their image with their constituency.

What are the GOP afraid of?

Open debate should bring out the best ideas from both sides of the aisle and benefit America as a whole, unless conservatives are afraid of what they accused the president of doing with the SEC's investigation of Goldman Sachs - biting the hand that feeds them.  Are the GOP in Wall Street's pocket, or atleast more so then the Democrats?
Posted by Kevin at 5:57 PM