I had heard about this story on Fox News but never tuned in. It was in regards to a restaurant owner, Ed Malin, who had decided to use his restaurant's marquee to post the following message: 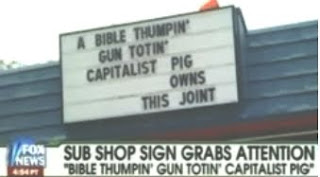 I just saw it pop up on Media Matters, where MMFA showed the clip from Fox & Friends with Gretchen Carlson and Brian Kilmeade, and I got a chance to watch the segment. I thought there was something of interest in the "fair and balanced" report, and it was towards the end when they started talking about taxes. Here is the video clip:

Now the part that interested me was when Kilmeade told Malin that "you work 90 hours a week and you figure out that 65% of your income was going to some taxes," and Carlson added that he is "fighting for the middle class.  Then shortly after, Malin told Carlson and Kilmeade that he had just entered the 33% tax bracket this year.  Carlson adds that he is "fighting for the middle class."  I thought it was interesting that these numbers were thrown out there - 65% and 33% - because Kilmeade and Malin obviously don't understand what they mean.

Kilmeade's figure of 65% is just way out there, and with Carlson backing him up, saying that Malin is "fighting for the middle class," then one would come to the logical conclusion that the middle class are paying 65% of their income to taxes, and this can't be farther from the truth.

Malin's figure of 33% is only the tax bracket, not the tax iteslf, and his use of the bracket shows that he really doesn't understand what taxes are, and I would probably say that the same goes for most Tea Partiers.  Malin stated on the program that he had attended a Tea Party gathering and was inspired by the anti-tax message, but really, what was the anti-tax message?

The Tax Day Tea Party that Malin said he attended, as also indicated on his Facebook page, was organized by the First Coast Tea Party, Inc.  According to their website, First Coast is a "nonprofit, grassroots group" that is not "affiliated with any political parties or interest groups," but a little digging revealed that the non-profit was co-founded by Billie J. Tucker, a member of FreedomWorks.  As we all know, FreedomWorks is the same organization championed by Dick Armey, and as we have seen in the past, Armey and FreedomWorks have supported the Taxpayer Choice Act, which if passed, would create two tax rates - up to $100K at 10% and 25% for everything above.

Malin had stated on the program that he is in the 33% tax bracket, and since seeing from his Facebook that Malin is married, lets do the math and figure out what Malin really pays in taxes when filing jointly with his wife, as opposed to his angry Tea Party rhetoric.

I found this great little tax calculator at MoneyChimp, and I think it will be perfect for illustrating my point.

The 33% tax bracket ranges from $209,250 and $373,650.  Since Malin said they had worked himself into the bracket, so one can presume that he was in a lower bracket the previous year. so taking that into consideration, lets look at the lower end of the spectrum.  Lets say Malin earned $230,000 last year.  According to the tax calculator, he would be paying 23.34% in taxes, which is less then the 33% he probably thinks he's paying and far lower then Kilmeade's ridiculous 65%.  It is also lower then the Tea Party supported flat rate of 25%, so I am not quite sure why Malin is upset.  Malin also lives in the state of Florida, which has no state income tax, so where do these guys get their numbers?  If you consider First Coast's view on taxes, you may have a better idea.

First Coast Tea Party had posted questions for political candidates, written by Paul Beaird, author of "The Freedom Philosophy."  When regarding taxes, here is the question First Coast would like everyone to ask:


The US Constitution expressly prohibited the federal government from imposing a direct tax on persons until this was changed by the 16th Amendment. Will you propose legislation to repeal the 16th Amendment and the income tax?

I think this argument against the 16th Amendment by itself doesn't solve the problem teabaggers have with taxation, because should they read the rest of the constitution, they would realize that the federal government has the power to levy income taxes on the population.  Their problem is that they misunderstand taxes in general, and utilize this misunderstanding to advance their political agenda.  Fox News knows this fact all to well, and this is why their hosts repeatedly misinform their audience about taxation - to effectively rile up the base.
Posted by Kevin at 10:58 AM