The Midknight Review: Round Three - Despite Baseless Allegations Against The Midnight Review, Smithson Plagiarizes Work

If you have been reading, there has been a bit of a blog war going on between The Midnight Review and The Midknight Review.  John Smithson, the founder of the latter, had came on my site accusing me of plagairizing the name of my website from his, despite my site being spelled differently and my site being up longer.  To his defense, Smithson had stated he had been blogging longer then I, but Google had removed his previous Midknight Review for spamming, although Smithson believed it to be a politically motivated attack.  Here is what Wikipedia defines as a spam blog:


Spam blogs, sometimes referred to by the neologism splogs[1], are weblog sites which the author uses to promote affiliated websites, to increase the search engine rankings of associated sites or to simply sell links/ads.

The purpose of a splog can be to increase the PageRank or backlink portfolio of affiliate websites, to artificially inflate paid ad impressions from visitors (see MFA-blogs), and/or use the blog as a link outlet to sell links or get new sites indexed. Spam blogs are usually a type of scraper site, where content is often either inauthentic text or merely stolen (see blog scraping) from other websites. These blogs usually contain a high number of links to sites associated with the splog creator which are often disreputable or otherwise useless websites.

There is frequent confusion between the terms "splog" and "spam in blogs". Splogs are blogs where the articles are fake, and are only created for search engine spamming. To spam in blogs, conversely, is to include random comments on the blogs of innocent bystanders, in which spammers take advantage of a site's ability to allow visitors to post comments that may include links. In fact, one of the earliest uses of the term "splog" referred to the latter.[2]

This is used often in conjunction with other spamming techniques, including spings.

This definition seems to fit the mold of the current Midknight Review, so I would consider it to be true for the original site as well.

On Tuesday, April 13th, Smithson posted a blog article titled "From the American Thinker, we have this weirdness from Obama. He goes to a tough part of town without the Secret Service or the press pool." In it, he goes on to talk about President Obama attending a non-existent soccer game. What is not in the blog article is the fact that the article was written by Cat Corben of The American Thinker. Smithson went as far as to copy and paste the title of the article, hyperlinks, and pictures, but he makes no mention of the author, which is interesting because the Corben's name appears right below the title of the article.

While I have cited articles or copied material in the past, I always make sure to give credit when I can, but Smithson's page appears to only reference the original source as the inspiration for his article, which is really Cat Corben's.

Here is a side by side: 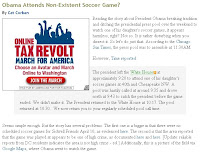 While Smithson does state in the title of his article that the story is from The American Thinker, the actual article, and the formatting on his site, or lack thereof, shows Smithson trying to pass this off as one of his own. I have viewed other articles written by Smithson where he does offer citations, with author's names or quotations indented, but I have also seen others like the Corben article, that were completely scraped from other websites. Why didn't Smithson copy and paste the author's name as well? After all, it was right there.

I checked Blogger's policy on copyrighted material, and The Midknight Review would be in clear violation of the copyright guidelines, and what I found to be even more humorous, is that Smithson's previous website was published on Google servers, Blogger is also owned by Google. If Smithson was originally targeted for his radical beliefs, then how come he was allowed to make not only one site, but twelve sites, on Google's servers, and an even more important question - "Why would Smithson make another blog on a corporation's servers he claims to have targeted him for political purposes in the past?"

That I cannot answer, but after reading Blogger's copyright policy, which you can read here, and if Corben would like, here is the infringement notification for Blogger, one thing is for certain - Smithson is a spammer, splogger, scraper, or any other term along those lines.
Posted by Kevin at 11:10 AM