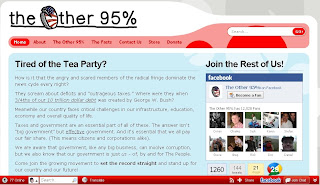 I had come across this interesting group, called The Other 95%, that seems to have started to counteract the grossly misinformed Tea Party narrative.  The Other 95% state that the facts are commonly being misrepresented or ignored, and they are there to set the record straight, like making it more known that Obama had already passed 25 separate tax cuts, which unlike the Bush administration's tax cuts that effected only the top 2.2% of the population, the Obama tax cuts had a farther reaching effect, cutting the taxes of 95% of all Americans.

Jon Stewart on The Daily Show had made a similar observation, explaining on his show that the majority of Tea Party claim to be arguing against high taxes despite experiencing some of the lowest taxes in recent history.  Even more absurd, those who have protested against taxes on April 15th probably don't pay taxes to begin with.  According to the chart from USA Today, 47% of filers will pay no federal income tax for 2009.

Press Secretary Robert Gibbs had told a reporter to "speak to the organizers, I guess, on ... whether they're contrived ... If you're one of the 95 percent of working families in this country I think it's that earns less than $200,000 a year, you've seen a tax cut. That's not contrived. Those are facts. ... I'll let the organizers of whatever these are speak to their motivations. I think they can be reasonably assured, though, maybe they fall outside the window of making a quarter of a million dollars a year." 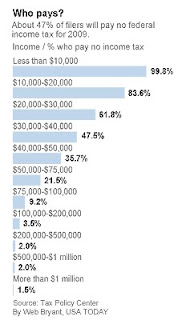 A reporter had also made it known that Gibbs that while the majority of the protesters made less then $200,000 a year, they still viewed the tax cuts as unfair, but considering the protester's demands, it seems that they are being unfair to the administration.  Every suggestion of a tax is vilified by the media as a tax increase on the middle class.  Gibbs had also made comments along the lines that people may not be feeling the effects of the tax cuts because local governments had raised taxes to close budget gaps.  If you think about it, this would fall in line with popular conservatism beliefs regarding states' rights.  The federal government is not collecting taxes on many Americans, leaving the states to determine what rate, if any, to tax.  I won't disagree that the tax code needs repair.  It does, and I would say the only positive result of the Tea Parties is the increased frequency of mention of alternative taxation methods such as the Fair Tax or the Flat Tax.  While The Tea Parties have brought these issues to the forefront, the vast majority still have no clue what the facts are, yet the continue to propagate their information as if they are policy experts, and they promote partisan politics to promote the agenda they can't even define.  While I commend them (just this once) for raising the concerns about this particular issue, they bring no value to the debate.

What do I picture happening?  A repeat of what happened to Ross Perot and the Reform Party.  Perot brought to attention the national debt.  While Perot was extremely popular, the two other major parties, the Democrats and Republicans, stole the platform issue and branded it as their own, but as the economy prospered during the 1990s, the public and their short attention span forgot about the debt.  Fast forward almost 20 years and you have a segment of the population bringing to the national scene concerns about a particular issue.  The Republicans were quick to scoop up those concerns and try to pass them off as GOP ideas.  Regardless of if the Republicans win or not, I believe in the next decade the issues surrounding the tax code will eventually decrease in priority, to be faced another time.

I think it is important that these concerns be debated, but I believe it best to leave the Tea Party out of the room.
Posted by Kevin at 1:11 AM