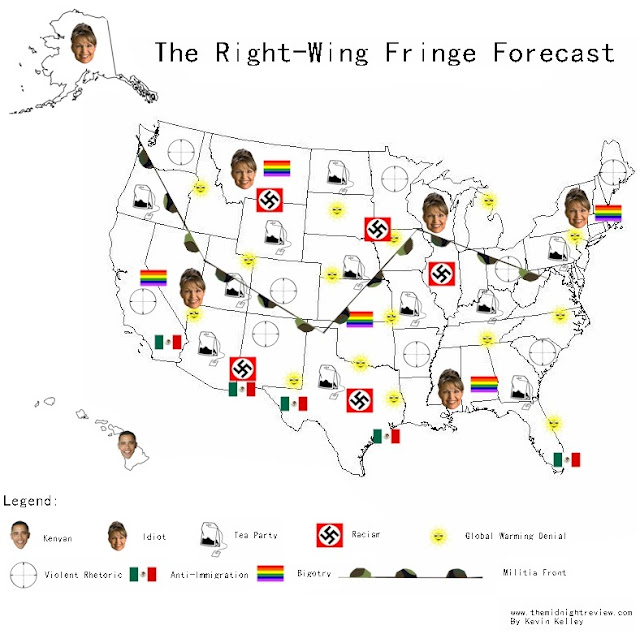 I had decided to create this graphic for fun, considering the common elements seen in the news coverage surrounding conservative protests and Tea Party rallies.  It is modeled after a weather forecast map, but with obvious differences.  I labeled President Obama a "Kenyan" because of the questions from the right regarding his citizenship, and I labeled Sarah Palin an "idiot" because she is.  The Tea Party's graphic is obvious, as well as "global warming".  To depict "racism", I figured the most identifiable symbol would have been the Nazi flag (I figured the KKK's flag would not have bee easily recognized), and for "bigotry", I chose the homosexual flag; "anti-immigration" uses the Mexican flag.  "Violent rhetoric" uses cross hairs because of Sarah Palin's recent comments on "reloading" and her website, and the "Militia Front" uses the symbol for a weather front, but uses camouflage coloring, and somewhat references the rise in right wing extremist organizations, such as the Hutaree militia.  I hope people enjoy!

UPDATE - April 18th, 2010 - I had noticed The Midknight Review copied this graphic and placed it on their website to prove liberals use Nazi symbolism, not conservatives.  If one would look at the map, they would understand that I am not calling "conservatives" Nazis, but simply using the symbol to represent "racism" when describing the actions of the fringes of society.  In copying my graphic, John Smithson of The Midknight Review also claimed this graphic is circulating around the left, which is interesting considering I had just created it a couple days ago.  I hope it does spread though.  I think it would be pretty cool to see my graphic elsewhere.
Posted by Kevin at 5:02 PM