I thought this was interesting.  John Smithson, of the Midnight Review, has made countless accusations against this site.  One of the biggest, apart from plagiarism, was that this site a pushed a "Marxist obstructionist" agenda, and as proof, Smithson pointed to my links page that cited as sources The Huffington Post or CNN. 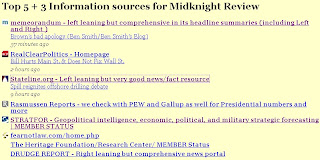 If you look at Smithson's website, he has links too.  Imagine that!  What is even more surprising is that he tells his readers if they are "left" or "right," which is oddly similar to what I had on my links page.  Based on Smithson's stupid argument, I could make the same accusations against himself.

Why, just recently, Smithson posted an article citing the Pew Research Center for the People and the Press, which he wrote was "typically Left leaning."

Why would a self-defined conservative activist cite a "left leaning" source? Maybe Smithson is a Marxist obstructionist disguising himself as a conservative, making silly arguments to discredit the far-right, maybe in the vein of Billionaires For Bush, but not quite satirical...

As a disclaimer, I didn't check to see whether these sites are really left leaning, or just left of Smithson's center, which is pretty far right, considering he believes Michelle Bachman to be just right of center!
Posted by Kevin at 12:37 PM