Over the past couple months, I have been detailing the permitting of flaming by conservatives on conservative sites while punishing critics of the far right.  Today, I came across another instance of Big Government flaming and censorship and thought I would share my findings. The string of comments and responses are from an article from Michael Zak, comparing President Barack Obama to Fascist Dictator Benito Mussolini - and they say liberals are the ones to draw comparisons to fascism.

Scrolling down the comments, I noticed some initial insults of users offering criticism of the article:

but then I came across a treasure trove of right-wing flaming permitted by the right-wing website.  It began with a comment by a user who calls themselves "beckisadouche."  I had noticed that not only did beckisadouche have a negative IntenseDebate score, their comment had been deleted.  To get a better idea of what they said, I scrolled down to view the responses, only to reveal even more deleted comments - 50% of the first 6 comments were deleted. 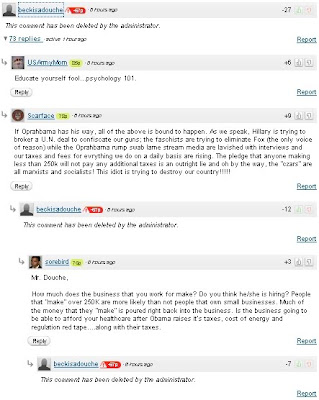 You may notice that the following comment of the first deleted comment is in fact an insult, calling beckisadouche a "fool."  Hardly a profane word, it is still a personal attack and a violation of the terms of use, but I am certain Big Government looks the other way on comments that support their agenda.  Later on in the string of comments, I had noticed this response from beckisadouche acknowledging Big Government's preferential treatment of favorable comments. 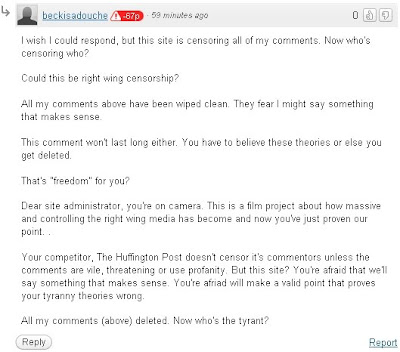 Here are some of the other insults against beckisadouche: 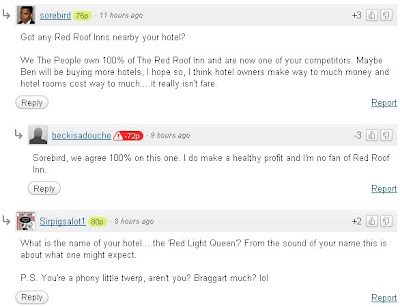 Notice Sirpigsalot1's attack against homosexuality?  Also notice that when beckisadouche agrees with the other commenter, they still got some thumbs down?  What is beckisadouche writing that is getting his comments deleted?  Unfortunately, there is no way for me to tell what exactly they wrote because they were deleted by the administrator but I was able to find this little exchange between beckisadouche and Big fan rvastar: 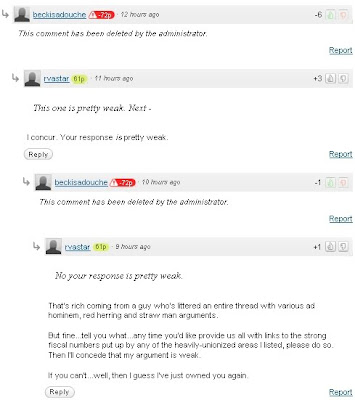 Notice the two comments deleted by administrators?  Check out the quotes rvastar put in their comments - "This one is pretty weak. Next" and "no your response is pretty weak."  Pretty horrible stuff, right?  Rvastar even goes on to write that beckisadouche has "littered an entire thread with various ad hominim, red herring and straw man arguments," but no insults, which leads me to believe that the administrators only deleted their comments because they were too critical of their agenda, and more then likely accurate as well (anyone using the argument that beckisadouche wrote profane and insulting comments would be at a loss considering I have documented numerous violations against the terms of service by Big fanatics that have not been deleted).  I had also left a comment to one of beckisadouche's comments asking what they had written that would get their comments deleted.  Here is the response: 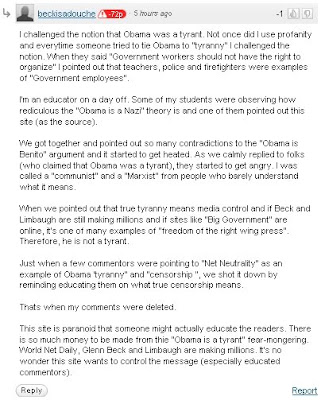 Interesting.  Here is the immediate flame to beckisadouche:

I noticed that even my simple question to beckisadouche netted me some negative debate points - all I asked was what they wrote and a link to this website so they could leave their comments, should they meet the fate of so many other comments of theirs, and come to think of it, how many comments were deleted by administrators?

19 deleted comments out of a total of 30.  That means administrators deleted 63% of beckisadouche's comments, and considering that beckisadouche stated that they did not use profanity, it is pretty obvious why the comments were deleted.  Big Government commenter From Georgia offered up their own opinion as to why: 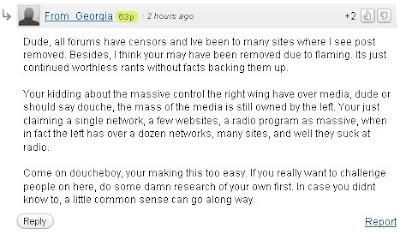 Flaming.  That is right.  From Georgia believes that beckisadouche's comments were considered flaming because according to their opinion, the deleted comments offered up "worthless rants without facts backing them up."  That pretty much sums up every Big Government article, especially the ones written by Jim Hoft.

Big Government uses a software called IntenseDebate to permit commenting on their articles, but when someone tries to debate the issues, they are quickly attacked by the other users and then their comments are deleted, giving the appearance that the person critical of the fringe was being nasty, reaffirming the belief held by the right-wing that those on the political spectrum to the left of the far right are simple thugs.  From Georgia obviously skipped over the numerous comments that offered up worthless insults directed towards beckisadouche that would be classified as flaming that were not deleted.

This problem is not isolated.  We see this happening all across the right-wing.  Sure there are plenty peaceful conservatives out there, but think about the rhetoric coming from the Tea Parties and the GOP - they encourage this kind of behavior.  As long as the Republican Party perceives the the Tea Party as solution to the Democratic takeover of both houses of Congress and the White House, the fringe will continue to enjoy increased attention, with their attacks becoming even more brazen.

Update June 18th, 2010 - So... it looks like Big Government administrators actually deleted one of Sirpigsalot1's comments against me AND Sirpigsalot1 had apologized for insulting me when I told them that was inappropriate.  While a mature gesture, I don't think this will cause a stop to the practice.
Posted by Kevin at 2:04 AM