As I have written many times previously, Andrew Breitbart's conservative website Big Government permits supporting commenters to flame others while they scrutinize critics of their articles. I have now witnessed something even more troublesome - my comments are being screened before they are posted. They were never moderated before.

I was responding to a recent comment off of a thread that I had started regarding union halls and churches being used as polling places when the following message appeared this morning after I hit the submission button:

I thought this was strange because I hadn't posted anything bad - the previous comment was discussing same-sex marriage, claiming that it was a moral issue that would force churches to change their hiring practices.  I simply pointed out that ten years ago, the Supreme Court decided that the Boy Scouts of America could bar homosexuals troop leaders - no profanity and no insults.  Here were the previous comments I had made leading up to the last comment that required moderation as proof: 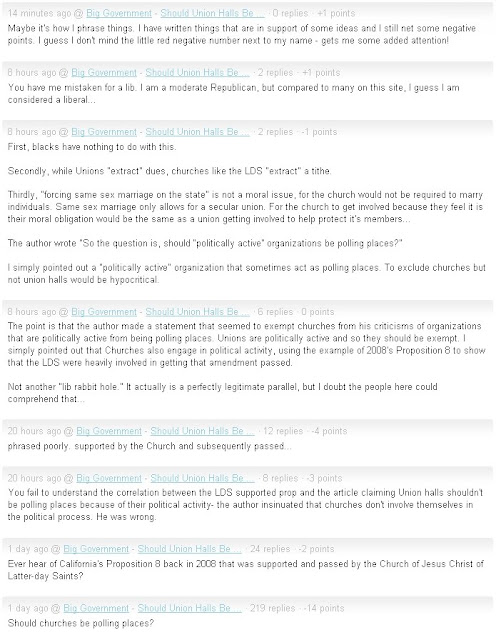 I find the moderation odd because I had left a comment fourteen minutes earlier.

The only comment that I can see as somewhat confrontational was a comment I had made eight hours ago stating that I was drawing a "perfectly legitimate parallel" and that the visitors of the site probably wouldn't comprehend that (the comment is benign compared to the various other insults hurled towards the critics of that site).  That comment even got me som flack from the commenters, with one telling me to go smoke marijuana and watch Jon Stewart while another claimed I was racist for not pointing out the support of Proposition 8 by black churches, which had nothing to do with the point I was trying to make, andactually somewhat supports the point I was trying to make because it points out churches are politcally active organizations (at least one rational mind came to my defense). 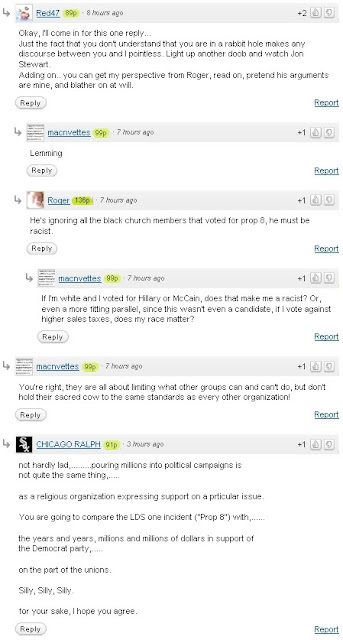 I will keep people updated as to whether or not Big Government allows my comment to pass their censors...
Posted by Kevin at 11:49 AM