Palin Believes Daughters Should Be Ravaged?

Sarah Palin constantly conjures up the image of rape when discussing her daughters.   That is why I found her recent tweet to be interesting.

The northern nitwit has decided to exploit her children yet again, but I thought her tweet was interesting, because I had never heard somebody be "ravaging." I had heard people be called "ravishing" before, but not "ravaging."

What are the definitions of both "ravage" and "ravish?" 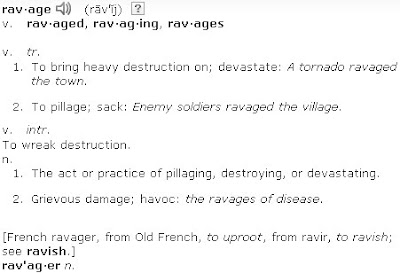 Does Palin believe her daughters to be damaged?  Maybe she meant to use the latter of the two.  Three out of four of those definitions mean to forcefully take something, and out of those three, two specifically refer to the taking of women.

Bristol is 20 years old and Willow is only 16.  Would somebody really want their 20 and 16 year old girls to be ravaged or ravished?  Palin's tweets remind me of when I was in the grocery store one day and these two little girls who looked to be around ten years of age were asking eachother if they looked "sexy."  This also reminds me of the shorts with words written on the backside with words like "hot" or "sexy."  These articles of clothing are not age appropriate.  The same, in my opinion, would go for Palin's comments about her own daughter's photo spreads.

Palin could have said they looked "stunning" or "beautiful," but she didn't.  Palin said her daughters looked "ravaging" - essentially damaged.

This tweet is a parody tweet.  If you noticed, the tweet comes from ScarahPlainUSA.  The article about this tweet is also a parody (sort of).  Sadly, I missed that when I initially wrote this article, but what is sadder is that it is 100% believable that Sarah Palin would write something like this.  Patrick at Palingates had pointed out to a comment I left there that this tweet was made in response to a real Palin tweet mentioning the "ravished coasts."
Posted by Kevin at 9:32 AM