I thought this was interesting.  I plugged in the domains for Media Matters and Big Government into this website that compares site traffic.  The results were pretty interesting. 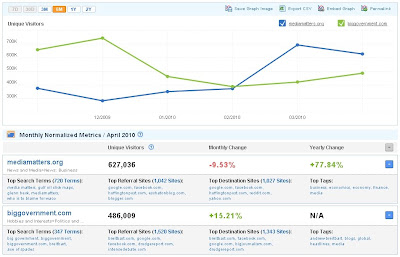 While Big Government started strong, with it's debut of their ACORN videos, the last six months showed an intersting trend while Media Matters showed a steady increase.

The same can probably be said about Media Matters, seeing that a top referral site and destination site is The Huffington Post, but when you compare the other search terms and destinations to that of Big Government, you see a different picture - readers of Media Matters explore more information instead of stepping into some sort of echo chamber.  Just look at the percentages of where their readers go:

Most readers of Big Government go right back into a Breitbart creation...

Thought these figures were interesting enough to share.
Posted by Kevin at 10:53 AM