Guess Who Was Supposed To Regulate BP's Rig?

I found an interesting article by Tom Hamburger and Kim Geiger at The Los Angeles Times that I would like to share some excerpts from regarding the Deepwater Horizon oil rig that exploded in the Gulf of Mexico earlier this year.


The Deepwater Horizon oil rig that exploded in the Gulf of Mexico was built in South Korea. It was operated by a Swiss company under contract to a British oil firm. Primary responsibility for safety and other inspections rested not with the U.S. government but with the Republic of the Marshall Islands — a tiny, impoverished nation in the Pacific Ocean.

And the Marshall Islands, a maze of tiny atolls, many smaller than the ill-fated oil rig, outsourced many of its responsibilities to private companies.

Isn't that something. Here is some more:


Under International law, offshore oil rigs like the Deepwater Horizon are treated as ships, and companies are allowed to "register" them in unlikely places such as the Marshall Islands, Panama and Liberia — reducing the U.S. government's role in inspecting and enforcing safety and other standards.

Here is what the article had to say about the United States Minerals Management Services:


The federal Minerals Management Service, which also has a role in overseeing offshore oil operations, deals only with issues "below the waterline" of the floating rig. It was not responsible for rig staffing, command structure or other above-water operations. 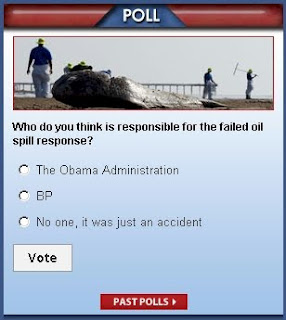 Now that this information has been made clear, I wonder if pundits like Sean Hannity will adjust their lies to take into consideration these revelations.  Consider this poll found on Hannity's website that asks who is at fault for the spill response.

I was watching Hannity's program and he attacked the current administration for this disaster - not just the response.  I find this interesting because considering the Hamburger-Geiger article, Hannity should really be directing his blame towards The Marshall Islands and British Petroleum, which allowed rig operator Transocean Ltd. to put in command an oil drilling expert ahead of a licensed sea captain.

Professionals disagree with the rig's command structure and believe authority should have been in the hands of a licensed sea captain, not an "expert" in charge of drilling.  To give the position such powers seems to be a conflict of interests, and "would not be accepted for U.S.-flagged operations," according to experts.

As the story unfolds, this matter gets even more confusing, but one thing is for certain - the oil industry seems to have a desire ignore the federal government.  Maybe that is why the Republicans continue to embrace unregulated offshore oil drilling, and this article makes that position even more perplexing, considering they are supporting the notion that international corporations can set up shop off our shore and circumvent federal safety precautions by registering their vessels with impoverished nations.  Aren't they the ones who talk about saving American jobs from being outsourced and defending America's sovereignty?  Wouldn't permitting foreign corporations to exploit our resources with little regard for our nation contradict that sentiment?
Posted by Kevin at 12:52 AM