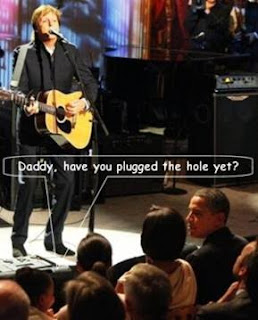 For Glenn Beck, insulting family is out of the question, or at least that is what he recently said after attacking Obama's little girl on the add, making fun of her education among other things.  Now right-wing blogger Doug Powers on Michelle Malkin's website has picked up on the insult, using Beck's comments to caption a picture of the first family watching Sir Paul McCartney at the White House.


In any case, Paul McCartney played at the White House last night, and what with the oil gusher non-management, economy on the brink of ruin and getting worse by the day, debt continuing to mount, states going to economic war with one another, terror attacks dramatically rising and emboldened tin pot dictators spouting off, it was the perfect time to talk about how stupid George W. Bush is.

Glenn Beck made his comment and sort of apologized for it, but will he take responsibility for his actions and call out any of his right-wing pals for doing the same, or will he try to play good cop in this never-ending blame game?
Posted by Kevin at 9:53 AM