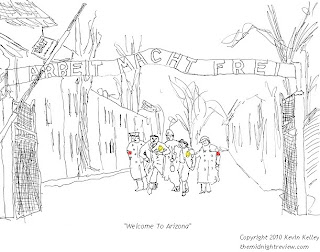 Hispanics are the largest and fastest growing minority in the United States, and have been increasingly thowing their support behind the Democrats for the past few years, in part to President Bush's failed immigration policies.  Now the Republican Party is continuing in that tradition of alienating a minority of the nation for the promise of short-term political gain, and that is quickly fading.

The GOP's backing of Arizona's tough new immigration law is proving to be unpopular with the nation's Hispanics.  Robert Creamer wrote for The Huffington Post pointing out facts that may show the conservative strategy is deeply flawed.


The passage of the Arizona "papers, please" anti-immigration law has forced Republican politicians around the country into a political box canyon that does not offer an easy escape. For fear of offending the emergent Tea Party - and other anti-immigrant zealots in their own base -- they are precipitating a massive realignment of Latino voters nationwide.

According to data released by Public Policy Polling (PPP), Texas Governor Rick Perry has lost his early lead over Democratic challenger Bill White and the race is now tied. The movement from a previous PPP poll in February comes entirely from Hispanic voters. PPP reports that:


"With white voters Perry led 54-36 then and leads 55-35 now. With black voters White led 81-12 then and 70 -7 now. But with Hispanics Perry has gone from leading 53-41 to trailing 55-21....there is no doubt the (Arizona) immigration bill is popular nationally. But if it causes Hispanics to change their voting behavior without a parallel shift among whites then it's going to end up playing to Democratic advantage this fall."

The punditry sometimes forgets that in politics intensity is often just as important as poll percentages. For many Hispanic voters, the Arizona immigration law is an insult. It is an attack on their very identity. And it is certainly a litmus test that tells a Hispanic voter whether or not a political candidate is on their side - the critical threshold test of voter decision making.

The same is simply not true for non-Hispanic voters. As a result, by allowing the Party to be defined by the anti-immigrant zealots - and refusing to lift a finger to pass comprehensive immigration reform in Congress - the Republicans are playing with political fire.

The more conservatives demonize illegal immigrants the greater their chance is for losing this fall.  I am sure Republicans will probably put some pressure on the brakes right before votes are cast, hoping for some American short-term memory problems to kick in, but that probably won't be the case for Hispanic voters, who will feel unjustly targeted by the GOP.  Democrats need to focus on comprehensive immigration reform and they need to highlight the conservative backing of Arizona's law in order to guarantee Hispanics vote for them now and in the future.  In addition, Democrats need to present a more unified front to help increase Hispanic support on other issues as well - Republicans already have the anti-immigration whites locked in with their crazy ideas of mysterious underground electric fences and littering the border with land mines.
Posted by Kevin at 4:41 PM