Do Illegal Immigrants Hurt The Economy?

I had read a post over at Media Matters for America by Matt Gertz that discussed a poll conducted by Bill O'Reilly asking his audience what were America's most pressing matters.  Here were the results: 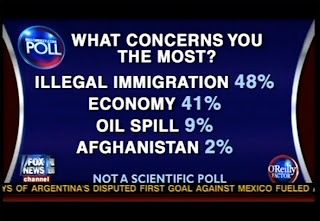 This got me thinking: "How would the ellimination of illegal immigration effect America?"

I found an interesting article by Adam Davidson for NPR that discussed some things about illegal immigrants and the economy.  With an estimated 12 million illegal immigrants in America, conservative media would like you to think that getting rid of all illegal immigrants would solve our unemployment woes, which as of June 4th sits around 9.7% with roughly 15 million in the work force unemployed.  Unfortunately, that is not the case.

Davidson writes the following regarding the impact illegal immigrants have on American wages:

Illegal immigrants seem to have very little impact on unemployment rates. Undocumented workers certainly do take jobs that would otherwise go to legal workers. But undocumented workers also create demand that leads to new jobs. They buy food and cars and cell phones, they get haircuts and go to restaurants. On average, there is close to no net impact on the unemployment rate.

Basically, illegal immigrants don't take away as much as the right-wing wants you to believe.  They are not going to take away upper level positions - they will really only impact high-school dropouts, and considering the trend from the right to attack public education and education in general, no wonder why there is a higher concern from O'Reilly's audience.


Illegal immigration has both negative and positive impacts on different parts of the economy. As noted above, wages for low-skilled workers go down. But that means the rest of America benefits by paying lower prices for things like restaurant meals, agricultural produce and construction. Another negative impact is on government expenditures. Since undocumented workers generally don't pay income taxes but do use schools and other government services, they are seen as a drain on government spending.

There are places in the United States where illegal immigration has big effects (both positive and negative). But economists generally believe that when averaged over the whole economy, the effect is a small net positive. Harvard's George Borjas says the average American's wealth is increased by less than 1 percent because of illegal immigration.

The economic impact of illegal immigration is far smaller than other trends in the economy, such as the increasing use of automation in manufacturing or the growth in global trade. Those two factors have a much bigger impact on wages, prices and the health of the U.S. economy.

There will always be illegal immigration.  Laws like the one in Arizona do not do anything to solve the problem.  Neither does securing the border between Mexico and America.  After all, you rarely hear the right-wing making a big stink about the over 7000 miles of border we share with Canada.

I also thought about this regarding O'Reilly's poll - while the first concern from his audience is immigration, the second is the economy, but as the NPR article points out, elliminating illegal immigrants would actually be a red mark on the economy.  Do O'Reilly's viewers realize this?

Whenever I am confronted by someone who brings up the issue of illegal immigration, I always ask them this question: "Are you willing to do the work of an illegal immigrant for minimum wage or less?"