Rick Scott And His Immigration Ad 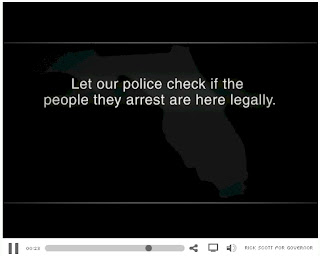 Up late last night, I finally got to see some of the advertising from some of Florida's political candidates, and one in particular stood out. I am talking about conservative gubernatorial candidate Rick Scott.

The ads from Rick Scott focused primarily on the Arizona immigration bill, and at the end of the commercial, Scott stated that he wanted to bring the law to Florida to allow law enforcement to check the immigration status of people they arrest.

I saw and immediately thought to myself that allowing police to check after a person has been arrested was not an issue with critics of the law. The issue was whether or not an officer can check immigration status on a mere hunch that you were an immigrant. Scott's video sounds pretty ridiculous when you think about it - of course law enforcement will have to check immigration status when someone is arrested... they're arrested!
Posted by Kevin at 10:29 AM