Does John Smithson Read The Huffington Post - A "Socialist Rag?"

I was perusing John Smithson's Midknight Review when I noticed something in addition to an improperly cited Associated Press piece - John Smithson cited an article that appeared on The Huffington Post - the online media website that Smithson himself attacked me for reading, calling the publication a "socialist rag." I understand that the article he cited was by distributed by the Associated Press and appeared on many websites, but Smithson's use of the article on his own site does more to discredit his baseless attacks against me over a month ago, after all, why would a self-proclaimed conservative activist cite an article that would dare show it's face on a socialist news outlet? The answer is simple - The Huffington Post is not socialist.

Now putting that all aside, lets look at Smithson's improper citation. Below are images of both Smithson's post and the article found on The Huffington Post: 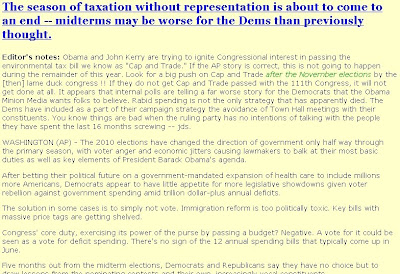 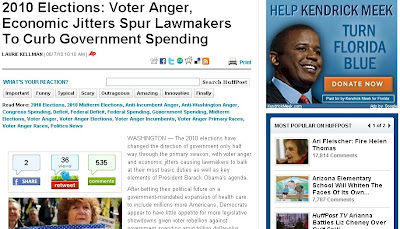 Notice something about Smithson's article? He references an "AP story" but does not indicate which story or who's story, even though one could most likely assume that it is the text below his editor's notes that begin with "WASHINGTON (AP)," but does Smithson identify the author?

If I was looking at the article, I may assume that it was Smithson who wrote the article, not Laurie Kellman, being that Smithson failed to credit Kellman.

The authors and readers at The Midnight Review have noticed John Smithson making a greater effort in crediting sources, but Smithson still falls short, either failing to connect to the original articles or failing to reference the authors, and in some instances, both.  We here commend the increased effort on Smithson's part but we noticed there is still more work that needs to be done.
Posted by Kevin at 2:35 PM