You might think this website loves giving conservative activist John Smithson some free publicity, but the point of these articles regarding his website, Midknight Review, is to indicate to the readers of both sites that Smithson's claims regarding this site being plagairized from his is completely false.  Today's installment of Midknight Review watch involves yet another improperly cited work.

On June 8th, John Smithson posted an article.  Below is how it appears on his website:

The article does not include any of Smithson's trademark editorial notes at the beginning or end of this post, beginning with the pronoun "I."  This gives the appearance that Smithson authored the piece, but when you get to the bottom of the article, you will notice a footer in italics that reference a "Mr. Klein."

Who is Mr. Klein?  According to the footer, the above article is "based on an article published in the May 2010 issue of the journal [Mr. Klein] edits.  This implies that John Smithson wrote this article based on the work previously published in Econ Journal Watch.

Check out this article posted by a one Daniel Klein for The Wallstreet Journal (I happened to get the screenshot from RealClearPolitics): 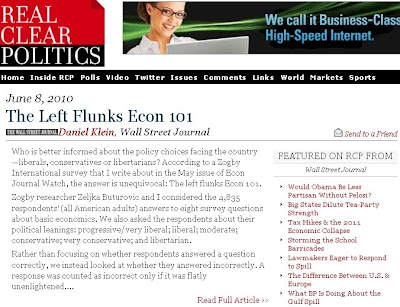 Looking at the two, one would notice that the two are exactly identical, down to the footer at the bottom of the article, except for the last sentence that includes a link to the original op-ed piece.  Smithson's footer stated that "his article appeared in The Wall Street Journal."  Based on all the information present, the reader would most likely believe it is referring to the op-ed and not the article based on the op-ed.

After my last article detailing John Smithson's improper citations, Smithson responded stating that his crediting "remains at the same high standard it has been from the beginning."  He then goes on to attack this site by calling these articles nothing more then "cut and paste tripe."  I was not aware that screen shots comparing his articles to the original articles was considered "the real problem" (maybe for him).  I simply pointed out the similarities and where a reader can become confused about the true source of the article.

Smithson compared his citations to a recent article of mine that displayed a chart, questioning if the chart was of my own creation or "another's."  I guess Smithson failed to notice that I linked to the exact page where I entered information into a couple fields that generated the chart.  I guess you can say that the chart was partially my creation, being that I used Compete's software to create it.  If we follow Smithson's logic, every spreadsheet created in Excel is property of Microsoft.

Again, I post about Smithson's Midknight Reviewto shed light on the accusations made by Smithson against this site, proving that such accusations are baseless and without merit.

Update - Since this article was published earlier in the day, John Smithson had updated his post, adding the following to his footer:

According to Smithson, I am a "liberal pundit out of New York" who is "confused," supposedly supporting Mr. Klein's premise for his article, but it seems that Smithson is mistaken on two things - I am not a liberal and I am not operating out of New York.  Maybe Smithson should get his facts straight...
Posted by Kevin at 1:06 PM