Who Gets The Federal Dollars?

I found this interesting chart from October of 2008 from The Democratic Action Team pointing out how much federal money based on whether a state is Democratic or Republican.  I thought it was interesting because it was before the Tea Party movement and before the really crazy rhetoric started to hit the fan. 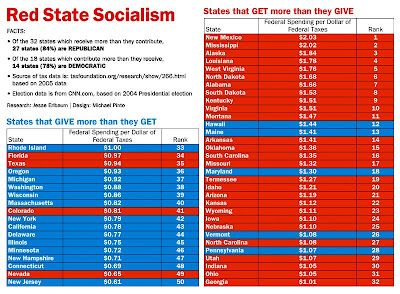 Apparently, states with higher concentrations of conservatives get more money back then what they put in while Democratic states give more money then they recieve.