I have written in the past about how I received in the mail various Republican push polls designed as surveys like the GOP YouCut program and the "2009 Obama Agenda Survey."  Today, I checked my e-mail and noticed a message from Florida Rep. Alan Grayson asking me to submit a survey so he can better represent his constituency.  I was somewhat expecting a Democratic push poll but instead I found a very balanced questionnaire.  Here are the questions as they appeared on the survey (I even left the dots filled to show my responses): 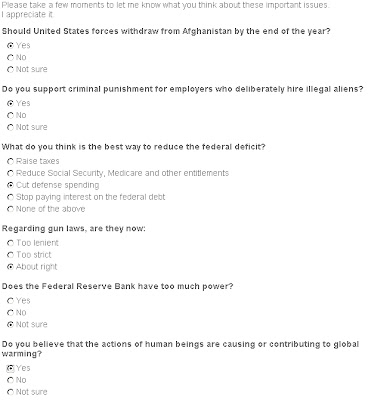 Look at the wording Grayson uses.  Would a Republican survey ask what is the best way to reduce the federal defecit and then list "cut defense spending?"  No.  More likely then not the GOP question and answer would read as the following:


Alan Grayson's survey was a welcome site to this author.
Posted by Kevin at 6:55 PM