I have written numerous articles in the past at lenght regarding the prevalence of flaming on Andrew Breitbart's websites - particularly against comments critical of the right-wing agenda.  I had left a comment on his new site, Big Peace, yesterday and noticed I had a response.  After reading the response, which seemed to be pretty offensive, attacking myself as well as calling Muslims "assholes," I had decided to report the comment to site administrators when I noticed something - the comments lacked a report button that was found on the other Big sites.

Here is a copy of my comment as well as the response: 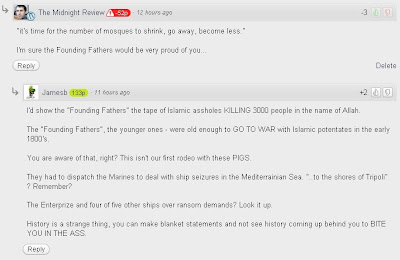 Not only were Jamesb's comment's offensive, they were absolutely wrong.  I decided to point out how wrong he was with my followup comment (which I expcet to be deleted):

I'm sure Jamesb will probably respond with the typical conservative response, claiming that I am a self-hating white person who hates Christianity and America and that I fail to understand the threat Islam poses to America and that the Founding Fathers were Christians and that the Treaty of Tripoli of 1797 meant absolutely nothing.

I will check back to see if a report button magically surfaces but I doubt it.  Considering the site is one big anti-Islam Christian-revisionist love fest, the site moderaters probably realized that with their fan base being a bunch of intolerant political rejects, there would be no comments left if they actually moderated the comments...

Update - Someone did respond to my comment pointing out an error I had made, which I was happy to admit - the Treaty of Tripoli did not end the Barbary Wars, although the treaty was renegotiated after the first war.  According to the response, the treaty was America capitulating to the Islamic forces because America did not have a fleet at the time.  That interpretation seems interesting.  Comparatively, I am reminded of the Monroe Doctrine, which essentially told Europe to keep their hands off our hemisphere - America did not have the power to enforce such a declaration but we issued it anyway, so what makes the treaty any different...

When scrolling down, I noticed another comment I made that I completely forgot about that got even more attention from the readers. Check out the profanity-laden responses that I received: 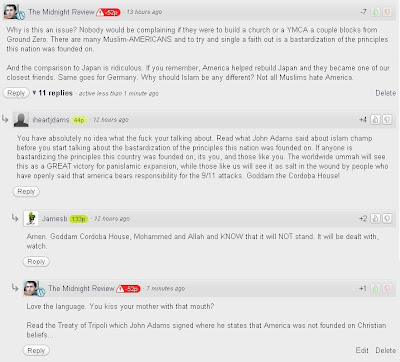 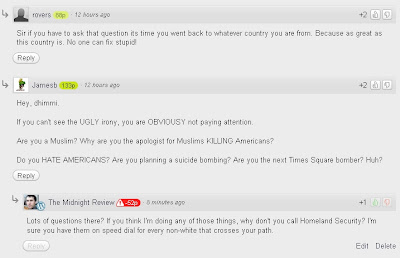 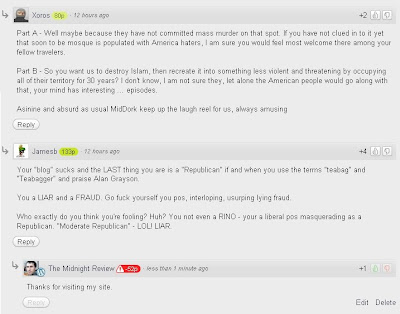 Seeing that there was no report button, I decided to comment back to see what kind of responses I get.  I thought it was interesting that Jamesb (any relation to RobertB?) went as far as to visit The Midnight Review only to comment about it on Big Peace - he seemed to fail to understand the point of my recent Alan Grayson article, which was to illustrate that Grayson, a Democrat, issued a rather fair and balanced survey, especially when compared to the push polls I have received from the Republican Party.

He also does a great job at reaffirming the belief that the GOP are in bed with the tea party (despite claims that they are completely separate).  If Jamesb was the true teabagger he makes himself out to be, he would also attack the Republicans, because after all, the party represents an establishment and is at odds with the principles of the teabag fringe.  I am a moderate Republican, but you can see how tebaggers like Jamesb want to purify the GOP and eliminate the notion that the GOP is a "big tent" party, kicking moderates to the curb, which will only help democrats and real independents in the long run.

Jamesb also shows just how ignorant he truly is by picking up on the right-wing talking point vilifying Alan Grayson when he has no comprehension of the regional politics of Central Florida - Grayson's predecessor had issued a term limit promise that he broke to run against Grayson, which deeply upset his constituency.  Grayson ran a better campaign and won, and so far, he has been pretty good for his district (a pleasant departure from Ric Keller, whom I also voted for). Teabaggers love to point out that America is a Republic - a representative democracy.  Grayson is doing just that - representing his constituency.

Update July 10th, 2010 -  It didn't take long for me to be attacked some more.  JamesB called me a "smug ass" and then proceeded to discuss the Barbary Wars because apparently he was still stuck on my error regarding the Treaty of Tripoli of 1797, failing to miss the point.  I called him out on his use of language: "Don't call me a smug ass, asshole."  Maybe I shouldn't have used the harsh words but I didn't start it - I was simply pointing out the logical fallacies of their arguments.  Anyway, here is the response to my comment:

There are two problems with the right-wing argument.  One is the insistance that America is a Christian nation at war with Islam and the other is that the Treaty of Tripoli was a capitulation to Islamic piracy.

The treaty indicates that America was not a Christian nation and was not waging a holy war against the Islamic states of the Mediteranean.  I even pointed out that the treaty was signed by Founding Father John Adams.  The attacks against my comments essentially stated that the treaty was intended to forstall war because America did not have a powerful enough fleet to combat the pirates, and that the language in the treaty denouncing Christianity and insisting we were not at war with Islam was all a lie.  Apparently it is okay to interpret certain things to defend your position while others may not, such as the Constitution.

I would also like to point to a couple other instances in American history in which America lacked the strength to do something yet did it anyway - the Revolutionary War and the Monroe Doctrine.  In the Revolutionary War, America fought the world's premier power despite lacking a trained army, and with the Monroe Doctrine, America lacked the capability to back up its warning to the rest of the world to keep their hands off the hemisphere.  Based on these two examples, why should I believe that the Treaty of Tripoli was just pillow talk?

It seems that as I continued along the lines of defending my reference to the treaty, the arguments against me changed - they went from claiming America was a "Christian nation" to America being a "majority Christian nation," or from America being at war with Islam to Islam being at war with America.  If you look at JamesB last flame, you can see an interesting statement - he insists that America fought the pirate states because of the establishment clause, protecting America from being colonized by Muslims.


You're making the same torchered argument that all liberals grasping at straws make - that a document here and a document there butresses your belief that the United State - a majority CHRISTIAN nation - should SURRENDER to Islam using the establishment clause as proof.

Am I to believe that America was threatened by Islam over 200 years ago and that the John Adams signed a treaty to keep the enemy at bay for close to 200 years?  This is sensationalist anti-Islamic propaganda at its finest!
Posted by Kevin at 2:10 AM