If The RNC Can't Handle Their Own Budget, How Can The Handle The Economy? 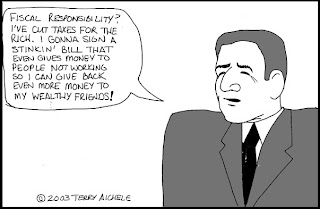 There was this article by Sam Stein at The Huffington Post that points out that the Democratic National Committee has directed attacks against the Republican National Committee based on the RNC's fiscal mismanagement that has made headlines in recent months and asking if these are the people you want to run the government.


Amid a continuing series of stories about money troubles at the Republican National Committee, Democratic partisans have begun trotting out a new campaign theme. If the GOP can't manage its own finances, why hand it the government checkbook?

"If you are running on fiscal discipline and responsibility and you have the problems the RNC has, it is a pretty big symbol of some problems they'd have [for governance]," the DNC's Jennifer O'Malley Dillon said towards the end of a panel discussion moderated by the Huffington Post over the weekend.

It was the most direct the DNC has been in making such a case. But the committee has been hitting this angle in less overt fashion ever since scandals and controversy began surfacing around RNC Chairman's Michael Steele's fiscal mismanagement. When the RNC was caught spending $2,000 at a lesbian-themed nightclub, the DNC pledged to remind voters that the self-proclaimed "party of fiscal responsibility" had "not only spent money freely and frivolously on useless expenditures... but then tried to hide the debt they financed their spending spree with from the public." When an internal RNC probe found that the committee was actually losing money in its recruitment of big donors, a DNC spokesman scoffed at the notion that Steele could now provide "advice on financial regulatory reform for the whole country."

I think this is a valid attack, especially when considering the attacks conservatives had made regarding the fiscal responsibility of Democratic legislators and the money-bleeding senate cafeteria a couple years back.  An article by Michael Eden from 2008 for Start Thinking Right aimed to point out "Democrat incompetence," asking if the mismanagement of the eatery was proof that the Democrats could be trusted crafting legislation that would effect the entire economy.


If a government-run cafeteria bleeds the red ink of cost overruns year after year, why on earth should anyone but the craziest, stupidest of fools believe that they can successfully run the health care system which represents over 1/6th of the economy?

For that matter, if the Democrat-controlled Senate can’t run a cafeteria, why on earth should anyone trust them to run the country?

I believe it is the same argument, although slightly different - Republicans definitely have some explaining to do.  Unlike the Senate, which was made up of both Democrats and Republicans, in my opinion, the case against the GOP and RNC is much stronger - after all, these are the guys stressing their fiscal responsibility credentials, and they can't even get that right!  The GOP has adopted economic policies both in their operations and in their platform that have proven detrimental when in action.

In the comment section of Eden's article, he responded to some of the responses, adding that Democrats just like to point fingers:


It’s funny how Democrats blame oil companies for gas prices, automakers for SUVs, insurance companies for health care, mortgage companies for the sub-prime loan meltdown, and so on. They refuse to blame unions or lawyers or individual people who make stupid decisions. And no way they would ever blame themselves!

They have a fundamental and irrational fear of business and fear of the private sector. They demand to control it in the name of the soulless, mindless proletariat who apparently are nothing more than mindless victims passively waiting to be manipulated by the next evil corporate entity that comes along.

This comment came two years ago, before the epic oil disaster in the Gulf, the bailout of the private sector auto industry, and right before the worst of the economic meltdown - I would think that the two years alone helped disprove all of Eden's conclusions, meaning the only argument left standing is that of the RNC's fiscal irresponsibility.
Posted by Kevin at 8:57 AM