Racism And The Conservative Movement

Considering the recent feud between the NAACP and the GOP and tea parties, I felt that this was relevant - back in 2008 on election day, I had attended my local polling place - the local library - to cast my vote in the presidential election.  As I was leaving the polling place, I found this illustration on the ground: 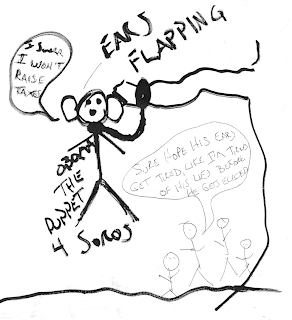 This was prior to the formation of the numerous tea parties in existence today but the tea parties were born from the same place this illustration came from - just consider the similarities between the language in this drawing and the language from various tea party websites:

The New Hampshire Tea Party Coalition, which consists of over 30 tea party groups, writes on their website:


We have written before about Nazi monster George Soros, the man who is basically providing the agenda for those running our country currently. He is a financial benefactor to a vast network of prominent leftist groups, directly funding many that operate here in NH and whose job it seems is to make false accusations against their opponents in order to smear them in the eyes of the public.

Before Its News, a right-wing blog, refers to George Soros as "Obama's Puppet Master."

How about this tweet by an Ohio tea party group: 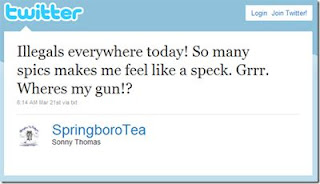 How about this letter to Abraham Lincoln written by Tea Party Express organizer Mark Williams that includes the following:


Freedom means having to work for real, think for ourselves, and take consequences along with the rewards. That is just far too much to ask of us Colored People and we demand that it stop! ...
Mr. Lincoln, you were the greatest racist ever. We had a great gig. Three squares, room and board, all our decisions made by the massa in the house.* Please repeal the 13th and 14th Amendments and let us get back to where we belong.


And must I remind people of the following picture of a tea party leader holding a sign that displays the word "niggar?" 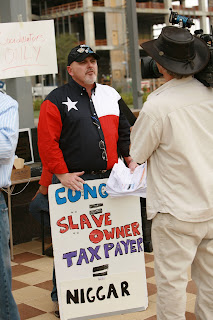 There was even this recent survey conducted by the University of Washington Institute for the Study of Ethnicity, Race & Sexuality, showing that tea party supporters have a higher probability of being "racially resentful" then those who do not support the movement.

I agree with the statement that the tea party in its entirety is not racist, but I also believe that it has done little to eliminate the racism that exists among its ranks.  Just consider Andrew Breitbart's attack against members of the Congressional Black Caucus who claim to have had racial epithets hurled at them during the passage of the health care reform bill - Breitbart even had the audacity to claim these congressmen are the real racists.

An article I found from The Kansas City Star put it nicely:


A resolution passed by the NAACP didn’t say being a tea-party member was equivalent to being a racist. It asked the movement to condemn the extremists too frequently seen at its meetings. If the tea-partiers truly want to change America for the better, they will act on the NAACP’s charge and work harder to make sure that no one — regardless of skin color, religion, or country of origin — would feel unwelcome.