John Smithson Should Be "Laughted Out Of Town"

John Smithson recently posted a YouTube video of Glenn Beck, but this author found the title of Smithson's blog post to be humorous (actually his entire post is pretty ridiculous): 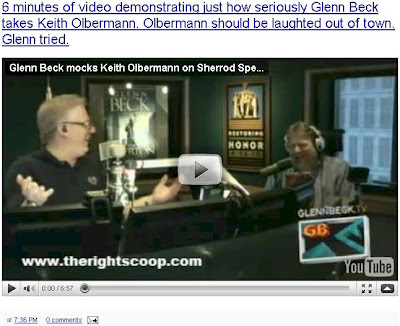 I'm sure you can get the humor from this posts title now...

I "laughted" so hard when I saw this, and the sad thing is spelling errors like this found in the title are quite common on Smithson's site.  Maybe he should hire a copy editor - that would cut down on the grammatical errors and the libelous statements made against others, such as this site...

As for the content of the video, Beck makes an idiot of himself when attacking Keith Olbermann for mentioning the Dreyfus Affair in comparison to the Shirley Sherrod Affair - Glenn Beck makes the moronic joke (although I think Beck was just too stupid to realize what he was saying) calling the man RichardAlfred/Alan Dreyfus after the actor, even bringing up the old attack on Olbermann's education, which is funny in its own considering Beck never even finished college.

Beck just shows how infantile and uneducated he really is - the Dreyfus Affair is taught in school (I think I read about it back in High School when covering European history).  Beck, as well as Smithson, also fail to understand the relevance the Dreyfus Affair has when compared to today's current events - here is just one reason:


[Louis] Begley spends some but not sufficient time in Why The Dreyfus Affair Matters linking the denial of the right to a fair trial and of basic rights to Dreyfus with current American actions, particularly the imprisonment of detainees at Guantanamo Bay Naval Base in Cuba, without charge, over many years. A quick comparison compels one to conclude that the United States has engaged in far worse violations of human rights, involving far more individuals, than were affected by the Dreyfus affair.

Beck is so fond of trying to link the past with the present, so why does he mock others who are capable of making relevant comparisons?  Seems Beck and by association, John Smithson, are just over-compensating for the things that they lack...
Posted by Kevin at 12:23 PM