I thought this little article was worthy of sharing - John Smithson, the conservative activist and small-time propagandist, apparently doesn't like Al Franken much.  Smithson posted this quote from Franken, taken from his appearance at the Netroots convention in Las Vegas, Nevada:


"If Republicans take back Congress they'll implement a truly dangerous agenda. Everything is on the table from repealing healthcare reform to privatizing Social Security."

Smithson accompanied this quote with an image (below) of Franken from his Saturday Night Live days, stating that this is coming "from a man who used to wear diapers for a living." 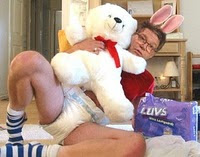 I found this statement to be humorous because the first image that popped in my mind was Saint Ronald Reagan in the movie "Bedtime for Bonzo," in which the conservative godfather shared the screen (and a bed) with a chimpanzee. 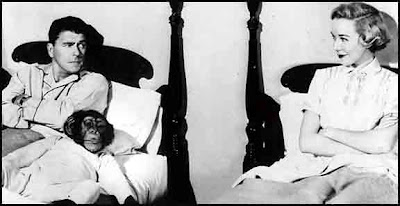 Since we are on the subject of Al Franken, I would like to point to this excellent article regarding his speech at the Netroots convention, written by Timothy Karr at Firedoglake, in which Karr highlights the great comments Senator Franken had made, especially in regards to Net Neutrality.

Conservatives are absolutely upset with this notion because they aim to control the flow of information and this would just stand in their way.  Franken appealed to his audience, stating that the government has heard plenty from corporations but not enough from the public.

Maybe if right-wingers like Smithson got over their hangups, they could actually look at the content of Franken's speech and realize that the position they are opting for is that of corporate America - far from advocating the interests of the average citizen.
Posted by Kevin at 4:09 PM