There was a Big Government article by Tim Slagle mentioning Godwin's Law, which states that "as an online discussion grows longer, the probability of a comparison involving Nazis or Hitler approaches … given enough time, all discussions —regardless of topic or scope —inevitably wind up being about Hitler and the Nazis."

Slagle writes that pretty much anyone who mentions the Nazis or Hitler has pretty much invalidated their entire argument -his article is accompanied by a picture depicting someone in a crowd holding a sign comparing Bush to Hitler, presumably to prove that Liberals are on the losing side of the argument.  Slagle takes his case one step further, wishing to add an amendment to Godwin's Law to also include racism:


But I think we should add another corollary to Godwins Law. I think that if you call your opponent a Racist, you have also lost the argument.

Looks like Andrew Breitbart and his slew of Big sites have already lost the argument...

You see, Breitbart made a post on his propaganda site, Big Government, on July 19th, accusing the NAACP of awarding racism - the recipient being Shirley Sherrod.  Breitbart posted a truncated video, claiming Sherrod was a racist, and insisting that "context is everything" - he even went as far as to display a picture of a "race card."  Breitbart played the race card alright, and now he won't back down, insisting he never meant to imply that Sherrod was the racist in question.

Here is a screenshot of his post - you be the judge: 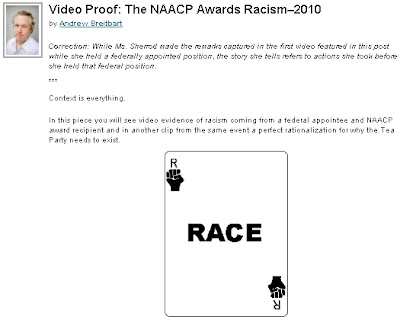