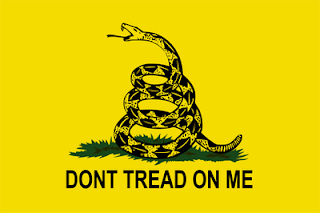 I thought this article by Big Government blogger Bob McCarty was pretty funny - he complains that Missouri senate candidate Scott Rupp is sending out campaign literature that resembles something one would see at the tea party.


When men who didn’t serve in the armed forces pretend to be decorated war heroes, they’re labeled as “fake veterans” and can even be prosecuted for for what many call “stolen valor.” Recently, one Missouri politician began mailing campaign literature that leads me to believe he’s guilty of stealing the valor of members of the Tea Party Movement (i.e., freedom-loving patriots who sacrifice time, talent and treasure in an effort to save their country from socialism). In short, he’s guilty of “stealing tea.”

McCarty is upset that Rupp sent out a campaign brochure featuring the "Don't Tread On Me" flag and pictures of people holding signs, and to the best of McCarty's knowledge, Rupp had not attended a single tea party event because McCarty frequently cruises that scene.

I find two things interesting and funny with McCarty's post.  The first being his comparison that Rupp's brochure is the equivalent of "stolen valor" (I wonder if he is referring to Mark Kirk), and the second being his feeling that American symbolism is owned by any one particular group - I'm sure McCarty would have been equally upset if a Democrat waved the Gadsden flag at a rally to protest conservative obstructionism.

I also thought this little nugget found at the end of McCarty's post to be quite amusing:


Because I don’t know Rupp personally and he has never responded to questions I submitted to him via his Facebook page, I must base my political assessments of him on impersonal factors such as the flyer and the manner in which the liberal news media treat him and his opponent.

Maybe Rupp hasn't responded to McCarty because he is a right-wing hack masquerading as a journalist.  His entire article is full of silly assumptions: "Rupp isn't conservative enough to use certain pictures in his mailings because I haven't seen him at a tea party rally," or "I don't know Rupp and he won't be my friend on Facebook so the bad things that I write about him must be true."
Posted by Kevin at 6:31 PM