National Enquirer Only Good For Democrats? How About Sarah Palin? 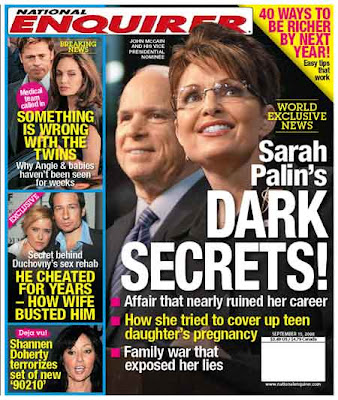 I thought this story was relevant despite being a couple years old - the National Enquirer posted a story back in September of 2008 detailing an affair Sarah Palin had with her husband's former business partner.


No less than three members of the man’s family including one by sworn affidavit have claimed that Sarah Palin engaged in an extramarital affair with hus­band Todd’s former business partner, Brad Hanson.

According to the article, Palin denied the accusations - maybe this is why she called Nikki Haley in support.  Palin supporters also denied the rumors, attacking the National Enquirer, with the McCain campaign threatening a lawsuit - the National Enquirer stood by their article stating their story had "several newsworthy revelations."  Some even claimed the Obama campaign planted the story.

Why do I bring this two-year-old story out now?

The National Enquirer had just published another infidelity story about a famous politician - Al Gore.  In a recent Al Gore article, the National Enquirer wrote about the former vice president attacking his massage therapist in a hotel.  Unlike the Sarah Palin article, the right-wing propaganda machines picked up on this story right away as a top story item - Andrew Breitbart even featured it on his Big Journalism propaganda site.

I find it interesting that when a story comes out about one of their own, the paper is not a reputable source and is threatened with lawsuits, but when they release stories about Democrats, like Al Gore or John Edwards, then the paper has some "damning details."

The right-wing media are a bunch of hypocrites.  If sites like Big Journalism are going to stand by the National Enquirer on the Gore and Edwards stories, then they should stand by the Palin stories, so as far as I'm concerned, Palin had an affair... and she faked her pregnancy...
Posted by Kevin at 12:38 PM