The Right's Attack Against Kagan And The 2nd Amendment

Every time I read an article from a right-leaning source regarding the Elena Kagan nomination hearings, I can't help to notice that most of those sites, if not all, claim she is lying about her 2nd Amendment position and either point to Justice Sotomayor's comments during her nomination hearings and her recent siding with the dissenting opinion in the gun ban case or they point to statements written by Kagan over 20 years ago.  It is my opinion that the right-wing would not have been happy unless they got someone repeal all gun laws.

First, looking into Sotomayor's opinion, I can understand where the right is coming from with their argument, although I see Sotomayor's response to have been very precise - conservatives are using a general opinion regarding the 2nd Amendment to blanket any case involving the 2nd Amendment.  They argue that the dissenting opinion regarding the gun ban contradicts what Sotomayor said last summer.  In the ruling, the dissenting opinion had written that the 2nd Amendment was not created "in order to protect a private right of armed self defense."

Sotomayor said last summer that she understood "the individual right fully that the Supreme Court recognized in Heller." And, "I understand how important the right to bear arms is to many, many Americans."

There is one problem with the right's comparison to Sotomayor's statements last year - what exactly Heller involved.  In the case District of Columbia v. Heller, the Supreme Court ruled that the Second Amendment protected the right to bear arms in a federal enclave, not the states.  The case did not address the issue of whether or not the Constitution extended to the states.

With that being said, it is my opinion that Sotomayor did not lie to Congress last year.  I don't agree with the gun ban, but unlike the teabag minority, I can understand the intricacies surrounding the events.

Now on to Kagan's comments and why the right-wing fringe believe she is lying.  In a RedState article by Brian Darling, Darling points to a memorandum dated August 27, 1987 from her to Justice Thurgood Marshall in the Sandidge v. U.S. case, in which Kagan wrote the following:


A jury convicted petr of carrying a pistol without a license possession of an unregistered firearm, and unlawful possession of ammunition The CA affirmed. Petr’s sole contention is that the District of Columbia’s firearm statutes violate his constitutional right to ‘keep and bear Arms.’ I’m not sympathetic.

Did Darling even read the memo?  Kagan wrote that the firearm was unregistered and that they unlawfully possessed ammunition.  At the time, the District of Columbia operated a ban that was not lifted until 21 years later, in the Heller case!  Darling wrote that Kagan's inclusion of the last line proves that she has a "personal hostility" to the Constitution.


When Kagan served the Clinton Administration, she showed a strong hostility to gun rights.  The L.A. Times reported on may 11th of this year that Kagan “drafted an executive order restricting the importation of certain semiautomatic assault rifles.”  Kagan’s political activism in implementing a gun control agenda was a political act, yet this nominee has yet to explain her constitutional justification for that executive order.  The L.A. Times further reported that “gun-control efforts were a hallmark of the Clinton Administration.”  Many conservatives would argue that an individual who works diligently on gun control efforts evidences a hostility to the right of all Americans to defendthemselves with a firearm.  Another gun control initiative by Kagan was her drafting of ”an executive order that required all federal law enforcement officers to install locks on their weapons.”

According to the Wikipedia page, the gun ban "barred the manufacture of 19 specific semi-automatic firearms arbitrarily deemed to be "assault weapons" as well as any semi-automatic rifle, pistol, or shotgun that is capable of accepting a detachable magazine, and which has two or more of the following features: A telescoping or folding stock, a pistol grip, a flash suppressor, a grenade launcher, and a bayonet lug."

I am unaware of anyone who needs to exercise their right to bear arms with a grenade launcher...

Also, regarding the installation of lock on weapons used by federal officers, I can understand how the initiative could be permitted - the guns are deemed an extension of the federal government, and can therefor be regulated.

The right-wing is just upset because they want to carry around rocket launchers and machine guns in the back of their pickup trucks without risk of being stopped by authorities. I wonder who that reminds me of... 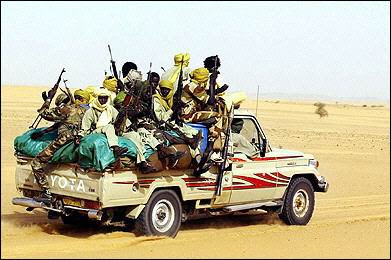