Yesterday, I got a letter in the mail addressed to me by Sean Hannity.  I was confused and so I opened it up - it was a poll from The Heritage Foundation with an introductory letter by Sean Hannity.  The letter was an interesting read and I thought I would share my thoughts on the letter.

First, the letter starts off with Hannity rattling off why the liberals are so bad, like crippling the "free-market system through the government's takeover and control of private business, punishing regulations, favoritism, and tax hikes."  I'm really not quite sure Hannity means by any of those things.  What government take over?  What tax hike?  What favoritism?

Next, Hannity wants to know "what went wrong with conservatives in Washington" and what needs to be done, and so he starts to mention the poll that was enclosed in the letter, but first he starts praising The Heritage Foundation - he even goes on to talk about how much he loves The Heritage Foundation stating that they are the best place to go for all the facts.  Here was an interesting paragraph from the letter:


Heritage has had remarkable successes.  Their big book of policy recommendations became the Bible of the Reagan administration - using conservative principles to develop hundreds of detailed ideas that helped Ronald Reagan and his alles to move America towards prosperity, traditional values, less oppressive government, and the strength to win the Cold War.

I thought this was interesting because in the introduction of the letter, Hannity attacks things like spending and health care reform, but later in the letter, he applauds the policies brought to the government by The Heritage Foundation.  I fail to understand just how Hannity can support Heritage and oppose health care reform, when the reform bill closely resembles a Heritage ideas.  Hannity goes on to even mention that Heritage did some research on the health care reform that was passed claiming
that the "results were devastating."

Here is the push poll I received: 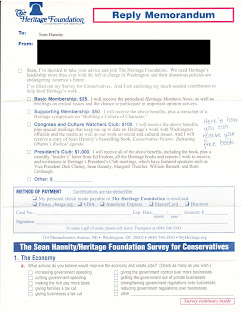 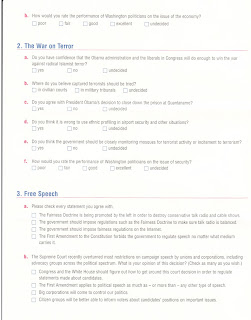 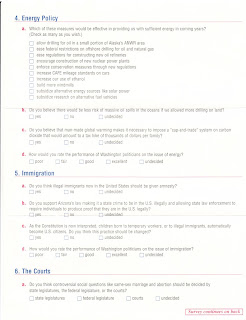 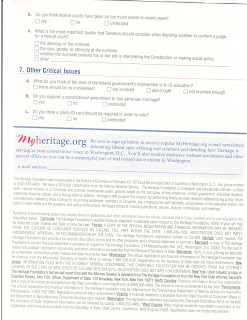 Some of the questions aren't too bad but when you put inot context that as an introduction, Sean Hannity bashes so-called "liberal" policies, then the questions have already be framed - just take into consideration Section 1, where it asks what is the best way to improve the economy and create jobs, offering such options as "increasing government spending" and "giving the government control over more businesses."  After reading Hannity's letter, would you be more inclined to agree or disagree with such statements?

Another example would be Section 3, regarding free speech - the first box the reader looks at states that "The Fairness Doctrine is being promoted by the left in order to destroy conservative talk radio and cable shows."

How exactly is The Fairness Doctrine going to "destroy" conservative programming?

According to Susan jones of Cybercast News Service, The Fairness Doctrine would reqire broadcasters to share the airwaves by presenting a liberal counterpoint to conservative radio, but because liberal programs don't bring in as much cash as the right-wing tabloid propaganda, the broadcasters would simply cancel conservative programs and opt for a different, more profitable format.

Also consider Section 4, regarding energy policy - the top three responses are a promotion of oil drilling and the reduction of regulations on the oil industry.  This makes sense considering ChevronTexaco and Exxon Mobil are contributors to the foundation and would benefit from their policy decisions.

And finally, I thought the last group of questions was interesting because it considers a constitutional amendment to ban same-sex marriage a "critical issue."

Essentially, this is just more right-wing push poll crap that will only be used to further manipulate the Washington.  I plan on responding to this poll but I know that my response won't matter because the Republicans have been taken over by a crazy bunch of conservatives.
Posted by Kevin at 10:05 AM