2010 Elections Aren't All Doom And Gloom For Democrats 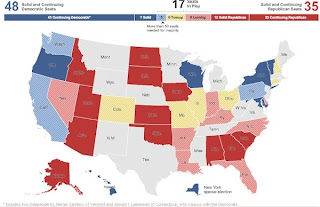 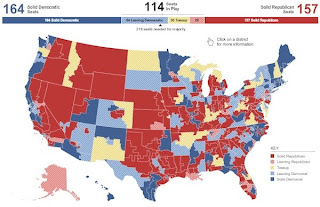 I thought these maps from The New York Times, indicating political leaning for the 2010 elections, to be interesting.

Each map, one for House elections and one for the Senate elections, paint an interesting picture that is contrary to the conservative narrative propagated on such propaganda sites like Townhall and Big Government.

Looking at the numbers, the Democrats are in that bad of shape.  They look to retain more seats then Republicans and will most likely keep a majority.

In the House, again, it appears Democrats will most likely maintain their majority.

Republicans look to pick up some seats, but not exactly the referendum against the administration conservatives have been clamoring about.  Democrats have squandered their lead in the name of bipartisanship - a bipartisanship the Republicans obviously don't want.  Hopefully the elections will help liberals and moderates gain momentum against the conservative machine...
Posted by Kevin at 5:28 PM