In the continuing story of Sand Lake Hills, the Board of Directors has finally released information regarding their latest attempt to prevent homeowners from attending the general membership meeting.

According to Florida statutes, all members and homeowners are allowed entry, as well as the right to speak, but apparently the folks in the Sand Lake Hills HOA believe the law does not apply to them. 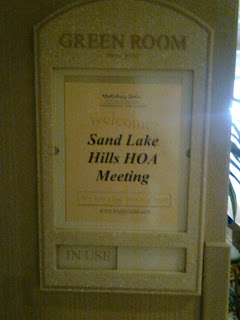 According to their proxy forms, they are limiting access to their meeting to "Board, Board invited guests or speakers, and members in good standing on record as of April 30, 2010," but the interesting thing is that their proxy forms have been recently added to their website either on or after that date (I had checked on the status of the HOA's proxy forms on the evening of April 29th), meaning they purposefully posted notification of their meeting without giving parcel owners a sufficient chance to become a "member in good standing" prior to the meeting.

Although the law does not require a homeowner to become a member, the board has found another loophole in their web of deceit - I really shouldn't call it a loophole since they are actively ignoring the law.  Instead, they have rationalized a way of keeping critics out, and that is by adding a deadline on membership status.  They had probably realized that some homeowners who have been critical of their actions were paying money in the weeks prior to their general membership meetings to gain access to their private meetings and learn of information the Board intended to keep privy to only a select few.

Previous proxy forms only stated that the homeowner be a "member in good standing" by the date of the meeting, not three weeks prior.

The proxy form also indicates that the meeting is not intended for "other guests or visitors," implying that parcel owners who do not buy into their corporation are "guests" of the neighborhood.

In addition, there are also issues regarding the method in which they chose to notify members and homeowners.  The HOA had put no physical notice around the neighborhood - a requirement of the law - and presumably, they contacted each individual member personally to notify them of the meeting.  This conclusion can be reached based on the simple fact that they stopped putting the time of the meeting on their proxy forms, but being creatures of habit, they had continually used the same location, the Holiday Inn Hotel at the Main Entrance to Universal Orlando, at the same time - between 8 and 9 a.m.

There is something else very interesting regarding the proxy, and I'm not talking about the fact that it gives voting authority to a person who has no legal right to serve on the board because they do not live in the neighborhood, and should be barred from service, as outline in the Articles of Incorporation.  When I viewed the proxy, I had decided to view the code of the online form.  In the code, I found the following line:

I am curious as to whether or not Bill, presumably William Flegal, Secretary of the HOA, also presumably the same William Flegal who is part of Lockheed Martin's Simulation, Training, and Support business unit, had used his personal computer or his company's computer to create a form that violates Florida statutes, and if he used the latter, if Lockheed Martin is aware that he is identifying the company as creating the proxy in question and using company materials to do so.

EZSurvey is copyrighted by Raosoft, a corporation that offers information gathering resources for the internet.  Through my research, it has been discovered that Lockheed Martin utilizes Raosoft's software, and in particular, EZSurvey 2004 (the same version used by Flegal), in their training departments.  Considering the price for the software ranges between $400 and $1500, I highly doubt that Sand Lake Hills bought the software, because a purchase that large would had to have been disclosed to the membership or itemized in the budget, unless the Board of Directors shifted funds around to accommodate buying the program, but records would have to indicate the purchase, and that still doesn't explain the "Bill at Lockheed Martin" in the source code.

Check out the actual proxy form below: 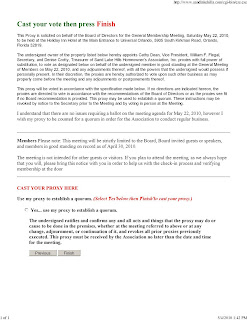